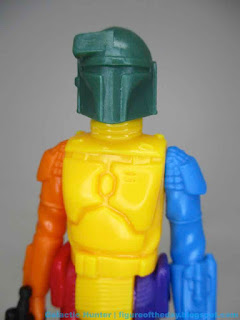 Bio: With his customized Mandalorian armor, deadly weaponry, and silent demeanor, Boba Fett was one of the most feared bounty hunters in the galaxy. Experience excitement like that of the engineers and designers seeing the first product samples of their designs with this Boba Fett figure! Inspired by prototypes that are often produced with whatever extra plastic is in the machine at the time, colorful prototypes enable the development team to look past the deco and focus on the sculpt, analyze mold alignment, and adjust for quality. (Stolen from Target.com.) 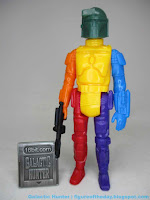 Commentary: There are multiple versions of Boba Fett (Prototype Edition) - at least six that I've seen come up for sale, all the ones I've seen on eBay with green helmets are this exact configuration. Admittedly when old-school collectors hear "retro vintage Boba Fett prototype" this is not what they envision. I assume most older fans expected a solid-blue figure with a firing rocket. Also 1970s Kenner figure test shots haven't surfaced in these multi-color looks, as far as I know - it's a whimsical collectible figure either way. It has gorgeous package art and should be rerun because it's neat - mine in particular looks like a box of crayons. 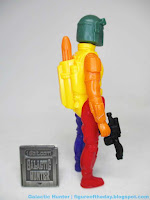 If you got Boba Fett [FOTD #2,692] it's a lot like that - it's a new mold, it seems like an old mold, but it's not the old molds from decades ago. This is the kind of item I see as the perfect exclusive - it's weird, but not essential for your inner child. Strangely-colored action figures like this feel like they're optional - and that is nice when you probably will never ever see one in the wild. I fell into an opportunity to buy one from a fellow collector, who got me this one with a green helmet, orange and blue arms, orange rocket, yellow torso, and red and purple legs. I really like it because it's weird (and why isn't Pheyden doing this yet, Matt?) The sculpting is good, and with absolutely no paint it's kind of criminal Hasbro is charging a premium for this figure - but that's how the collector market works. A smaller audience is more willing to pay higher prices for some unusual stuff, and some manufacturers are happy to do it. (See also, Mattel, Playmobil, Funko, etc. etc. etc.) It's a smart way to keep business booming and further subsidize some of their offerings, because if you can sell a single collector two - or thirty - of the same guy, it'll help pay for tooling on the obscure figures that they hopefully also manufacture. Of course, Hasbro gave up doing weird aliens and droids (my reason for collecting) years ago, so. Yeah. Anyway, at least we got a pretty awesome and colorful Boba Fett out of all of the cost-cutting. 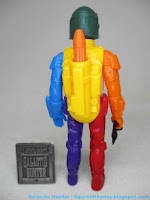 I like this figure and if I saw more at retail in other colorways, I'd probably buy them. (I did buy a couple Vaders.) It's not for everybody, and is absolutely skippable as something that exists outside the diegesis of the saga. It's a weird figure for the sake of weird figures, and while I would probably groan about a The Black Series release like this I won't complain when it comes to Kenner. This is sort of a perfect expression of a goofy idea, and I'm pretty happy to have this color configuration, too. Get one if you can find it.

Collector's Notes: I got mine from Ken, who was kind enough to sell me one at cost.

I hate how limited these were. Didn’t Target notice how fast the Vader pre-orders sold out, and the stormtrooper sold out almost immediately. I can’t justify the secondary market prices on Fett for a really cool figure