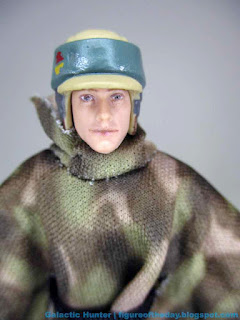 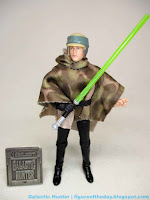 Commentary: I like this one a lot. When I was a kid in the 1980s and 1990s, there was no internet like we have today - if you wanted vintage Star Wars figures, you had to network and hit garage sales or flea markets. One of the very last figures I had to track down as a kid - back when things were cheap - was the original version of Luke Skywalker (Endor), which this 2021 release tries to mimic. It's an unusual mishmash of new and old parts, capturing some elements perfectly and others... less so. The big question of if you should make the best replica of the movie character, or the old action figure, is something that Hasbro seems to be struggling with - and this time they said "let's do both." 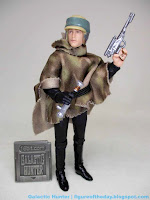 The core body is the 2010 Death Star Luke figure which has been released and rereleased and you've probably got one. This means it doesn't have the vest on the chest under the poncho - which Luke is probably wearing under the poncho. Or maybe he carries a change of clothes - if you look at the scene where Luke and Leia talk about their mother, and lighten it in Photoshop or whatever, it seems Luke has the vest from Jabba's Palace on. Most if not all Hasbro action figures (and Kenner's 1985 figure) opt to leave the vest off and usually have Luke with his Death Star shirt underneath. Either way, what matters is Luke has the lateral hip movement and bend-and-swivel wrists which were in style back in 2010 when this body was first released. If Hasbro were still in the vehicle business, you would be happy to put this one on a Speeder Bike. Or Playmobil horse, if you've got one on your desk. Luke has no problem holding his weapons, and you can plug the hilt right on the figure's torso. Hasbro was probably right to reuse the same body again. It's very good, and the poncho covers most of it anyway.

Hasbro gave Luke a new head, and like the 1985 original the helmet is molded to he head. The paint job is great, and it looks like his helmet is a separately-molded piece so both it and the face are molded in color. And they look great! The helmet has the markings and scuffing similar to the movie, and the face is appropriately Luke-y. The photoreal paint looks great to my eyes, but nothing digital holds up to perfect scrutiny under the harsh lights and macro lens of our photo studios. Of course, your eyes aren't that good so he should look good to you in most situation. I really like how the head turned out, especially since a lot of Return of the Jedi Luke heads have looked off-model, weird, or just awful. And of course, some are good - Hasbro was right to make a new sculpt here. It turned out nicely, and hopefully they're going to make more of this figure so you can get one. 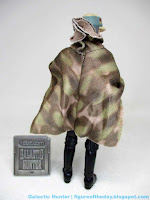 Accessories include the blaster from Jabba's palace - which Kenner's figure included - but sadly, there's no holster to carry it. That makes this a nice nod to the Kenner original that didn't include a lightsaber, sadly. But that's OK - this one has two. You've got a hilt and a fully-lit blade, both of which are painted nicely. The blaster is similarly well-painted with a copper grip and silver other parts, and given that the figure has glossy boots and an all-new poncho with elastic belt, everything more or less looks right. Elastic as a belt can only look so good - someone may make a better aftermarket replacement - but ht poncho is excellent and hangs nicely, with a good pattern printed on it. The hood is a little bulky, but so were almost all releases of Endor Luke. It's fine. It could be better, and it's probably the best we'll get for years.

With Hasbro's continued reliance on older molds, it can be understandable why they'd bring one back - like C-3PO - and vexing on some others, like Endor Han or Admiral Ackbar. This Luke could have swivel thighs, but the articulation is dang near perfect for vehicle riding and the poncho is a gem. I love the helmet and the nods to the Kenner original, but optional holster belts would be nice too. But why am I complaining? This is a nice upgrade at $13, and as long as you can get one for about that price you'll be a happy camper. As long as the Ewoks don't eat you.