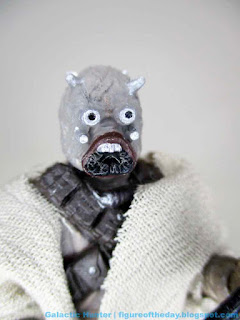 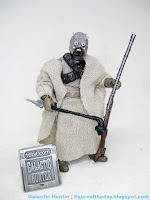 Commentary: At first glance it seemed as if the Tusken Raider offered at Walmart this year was little more than a repaint - thankfully, this was not the case. The partial retool of The Saga Collection Vintage figure from 2006 is a big improvement, and fixes a couple of the complaints we all had about the original figure - and some we didn't think to ask about! If you can get a few of this one, you should, it's a decent army-builder. It's not perfect, but it's much improved.

If you have the original release, this one improves on it with a new head, new arms - with better non-swivel elbows! - new soft goods, and coloring which seems to be more in line with the original 1977 film. (The bad news is that most of the other appearances of the Tuskens seem more in line with the lighter, cream-colored figures.) There was a lot more contrast on the original Kenner toy and subsequent movie appearances - this one is darker, greyer, more Earthy. It's a dirtier, more lived-in costume that even has silver caps on the rebreather. The "face" looks truer to the cardback photo minus some missing brown paint around the mouth mask, and the soft goods are much less bulky. The most exciting improvement are the aforementioned elbows - now they can bend and swivel. The 2006 ones just swiveled, and were prone to falling apart inside the sleeves. The one thing about the new figure I disliked were the "frozen" wrists, which may be fixed by heat and the boiling water trick at your own risk. 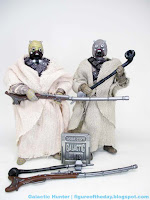 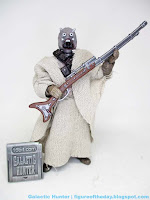 The legs and torso are more or less the same, with improved deco. Since he has old-fashioned hips the figure can't sit on a Bantha very well, so a wholly new 100% sculpt would still be welcome - be it from a classic film or their The Mandalorian appearances. With the different colors, it's like a whole new clan of these guys - and since it's truer to the first film, you've arguably got a reason to buy one or two. I might recommend waiting for a rerelease to troop build due to the aforementioned mask issue, but if you don't notice it being off, just stock up now if you can. I mean, you're not going to find them on pegs anyway, but if you did you could potentially stock up.