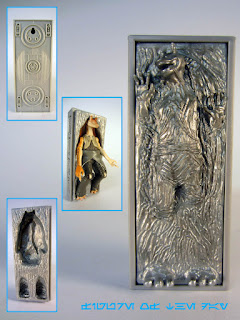 
Commentary: A quick aside: while I like the products, I really detest the whole "there's one exclusive figure in this huge box that won't fit in your luggage" concept exclusive.   It may be the most awesome thing to look at, but transportation and availability borders on cruel... thankfully Hasbro made sure this Jar Jar Binks in Carbonite showed up on HasbroToyShop.com a couple of times, of course, you needed to be paying attention then.  As it's not quite a figure, I was surprised to find out it was fairly hefty.  I'm not sure how to approach this piece, because it's both very cool and very wonky all at the same time.

If you want to take this piece seriously-- and you shouldn't-- it's far too small to fit the fairly tall Jar Jar inside.  The character relief on the front has been shrunk slightly to fit in the frame, which no doubt exists to use with Han Solo and I assume we'll hear that announcement this week.  Despite the fact that it isn't Han Solo on the face, the sculpting, detail, size, and heft make this the best Carbonite block ever made  by Hasbro.  I mean, it actually has a backside.  That never happens.

This item works best as a stand-alone piece.  In and of itself, it's really fun.  The hook on the back of the block should let you easily hang it on a wall on a nail, which is just fantastic.  That's what you'd want to do with this.  It stands on its own just fine, unassisted,  and has a flat bottom with sculpted lines and designs in it that you may never notice.  It looks good.  The side panels are fully sculpted and painted in spots, although the plastic color drowns out the red and silvers used to decorate the sides.  If Hasbro left off the paint, I doubt you'd notice.  The front of the item seems to be dipped in silver paint which brings out the frozen Jar Jar detailing nicely.

I assume that when the Han Solo version comes out, people will improve it with silver paint as the silver plastic seems to absorb the detail.  It's a crying shame this may be one of the lower-run, higher-price figures in the line because it's such an awesome desk accessory.  It stands right there, looks great, and is a fine way of saying both that you enjoy Star Wars and are willing to spend money on an item just to remind people how much you don't like one part of it.  Or you can throw it on your The Force Unleashed shelf, as it is hidden in that game in the background.

Compatibility Notes:  The first thing I did after opening it was take it to my 2010 deluxe giant Jango Fett's Slave I from The Clone Wars.  There are two Carbonite slots on the toy, one under the cockpit, and one above the loading ramp in the back.  The item fits above the loading ramp, in the "trunk," quite nicely.  The item is too thick to fit in the Carbonite storage chamber under the cockpit.  If you remove the front piece, it slides in perfectly.  As such, any Han Solo-themed variant may still fit in that slot in the future.   The block is too small to fit Jar Jar Binks inside the thawed-out "face" of the block, although you can sort of squeeze him in there.   I appreciate what Hasbro aspired to do, but as a "gag" figure it really is best to appreciate it on its own and not in the greater context of the line.  Which is, frankly, exactly what a hard-to-get convention exclusive should be.

Collector's Notes: People are crazy. How crazy? Just the cardback sold as high as $40. (What is wrong with you people?)  If you want this figure, and don't yet have the vintage wave 6 figures, I suggest buying the entire chamber on eBay or Hasbro Toy Shop as it's available.  JUST Jar Jar in Carbonite typically goes for $60-$80, while the entire set is closer to $120, give or take.  I suggest you do the math and a little research, while it's still quite expensive for what you get, it may be a better bargain.

Totally would have paid $20 for it if they released it individually.