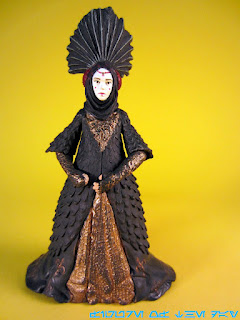 Bio:  As the Trade Federation plan to invade peaceful Naboo unfolds, Queen Amidala must appeal to the Senate for help. In times of danger, the handmaidens serve as secret bodyguards by posing as the Queen, such as on her way to the Galactic Senate on Coruscant, in which Sabe served as the dependable and nonchalant decoy for the Queen.   (Taken from the figure's cardback.)


Commentary: I actually thought I already did this Queen Amaidala (Royal Decoy) figure but I can't find a record of it on my computer, so here goes.  Where to begin?  This is probably a fine example of how you should probably do this kind of figure.  She has no hopes of sitting, despite sitting in the movie, and no action scenes, and really not much to do other than sit around.  Alternate legs would have been nice, but this sort of thing wasn't exactly common in American toys at the time.   Limited articulation is the name of the game, with a black feathery dress highlighted in gold reducing her range of movement.  The head seems to be jointed, but my sample sure as heck doesn't budge.  Her shoulders and elbows are swivel joints, which require fewer parts and I am told are easier to engineer.  Under her dress are legs in black tights with a short skirt or dress covering her, uh, more interesting parts.  There is a waist joint but since the dress is so long, it serves no real purpose, and the feet lack foot peg holes. She wears glossy black high-heeled shoes, which I'm sort of surprised they bothered to paint a different color from the legs.

From a sculpting and engineering perspective, it's an incredibly spartan take on the Queen's decoy and while it's a good representation of the costume, it does come off feeling a smidgen cheap due to the richness of the color, or lack thereof.  It's good, it was cheap, and it was released in a period where we were gifted with an astonishing number of figures of the Queen and/or her decoys-- Power of the Jedi delivered 3 over the course 18 months, no small feat given the lack of women in these toy lines.   Because this is the only (and therefore best) version of this costume as an action figure, I suggest that you buy it.

Collector's Notes:  Loose samples are a dollar or two.  Carded ones, $10 before shipping tops.  I suggest looking to buy a collection or a lot on eBay because the price per figure usually borders "free" these days.  Her feathers look different in different stills, so I'd say it looks good enough.  Predating this figure by about two years was a KFC kid meal premium figure, which was about the same size for a fraction of the price.  You could crack her open and stick a Padme figure inside, which constitutes a spoiler for the extremely dense.  Would you believe that there were fans that insisted Sidious and Palpatine might not be the same guy?