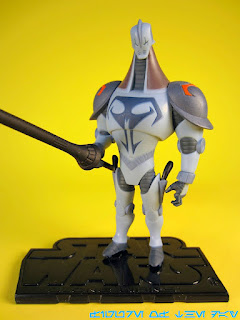 
Commentary: I'm somewhat surprised Hasbro gave us so many versions of Durge, Lucasfilm's Bounty Hunter villain from the 2003-2005 incarnation of The Clone Wars who has been left completely out of the 2008 revival.  With new fewer than 4 figures, it's something of a miracle that we got this incredibly cool stylized version of the Mandalorian-hating hunter who the backstory tells us joined up with the separatists just because he hates Mandalorians so much, and since the Republic's clone army was somewhat sort of related to them, he signed up.  That's some hardcore racism yo.  (OK, so maybe there was some torture or murder involved... but still.)

In the cartoon this character was something of a superhuman monster with limbs that defy the laws of matter, regenerating and changing shape in freakish ways.  Prior to that, he rode around on a bike with his lance and "jousted" with the Republic army (on TV, I know the comics were a different story.)  The character was tall, bulky yet elegant, with a refined design that completely covered up any hint of exposed flesh.  The tiny head made his body look even larger, and he has limited articulation.  The sculpted detail is quite good, and the money they saved on joints went into giving him a good paint job.  One of my favorite features is his twitchy left hand, which has fingers wriggling in a way that suggests an agitated or frustrated villain ready to leap into action at any moment.  He also has two blasters sculpted into his holsters, but they are sadly not removable.   A jetpack on the figure's back is glued into place, mine is crooked, and I hope yours is not.

Collector's Notes:  In addition to this character, Hasbro has a Transformers character named "Dirge."  Wookieepedia say Durge was supposed to appear in episode 20 of the original series, and was replaced by General Grievous.  It goes on to say he almost appeared on the current show, but was replaced by Cad Bane.  Dude can't get a break.  Oh, and the figure is pretty much worthless, $2 and up, but not much up.  The more time I spend with these figures, the more I like them.  They're terrible toys but beautiful display pieces.