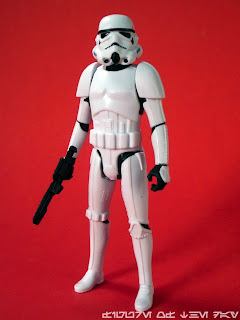 Bio: Stormtroopers track down Rebel infiltrators in the Death Star. Dutiful enforcers of the evil Empire’s will, the Stormtroopers search the battle station for Luke, Han and Chewbacca, who are on a mission to rescue Princess Leia. (Taken from the figure's cardback.)

Commentary: Infuriatingly good.  Hasbro claims that this Stormtrooper was designed to be modeled after the suits used in the original 1977 film, which is named "Star Wars," and screw you if you say otherwise.   It reminds me a lot of the promo armor suit used around 1977, and may well be the same thing but it just seems to have a slightly different vibe.  The sculpt is completely new and it's Hasbro's only modern era Stormtrooper to sport 5 points of articulation.   It feels like an old figure, which is what you want.  It can even hold on to his blaster just fine, and his skinnier build is a stark contrast to the bulk of the troopers in your armies.  It's great.   Hasbro's biggest screw-up here was packing it 1 per box and not releasing it as a 2-pack in the Mission Series assortment.  Seriously - show of hands - who wants only one of this?  I've only got one, and I'd buy a whole freaking squad of this, and I haven't done any troop building for years.  (Hasbro, if you're reading: please sell me a case of 12 of these.  Or a few cases.  I'd spring for 20 of these.)

Most Stormtroopers and Sandtroopers we've been getting for the past 10 years all come with parts from 2004 and 2005 releases - this is a complete refresh and it shows.  The helmet isn't removable, and it looks a little bit wider.  The head turns just fine, but doesn't have a ball joint.  This figure passes The Landspeeder Test, which is my arbitrary test of determining if a retro action figure is designed properly.  Getting Boba Fett in is a struggle, but the Stormtrooper glides right in perfectly.  Kudos, Hasbro.

This is the Stormtrooper figure the old farts wish they had as kids - no holster to get in the way, the grenade is reduced a bit so it's visible but not an eyesore.  The helmet sculpt is one of Hasbro's best, certainly at this size, and the only real complaint I have is that the grey highlights on the helmet are far to pale.  Darken 'em up a bit just so I can see them.  Otherwise?  Greatness.  This may well be Hasbro's best toy figure of 2013.  Sure, the Black Series have more articulation and detail.  Yeah, the 12-inch figures are bigger and provide more for the money.  But this guy?  This is as close as Hasbro got to making an all-new 1970s-style action figure this year, and everything about it just works well.  It's a crowd-pleaser.  And it also figures that it's a royal pain in the neck to get one.  Or two.  Or more. If I don't get at least six I'm going to get pissy, my Imperial Troop Transport demands new troops!

Collector's Notes: I got this from Entertainment Earth in early December.  I have not seen it in stores yet.  I'd have bought more if I did.

I agree with "Best Hasbro SW toy of 2013"...and maybe a few of the previous years, too. I'm not a serious "trooper" guy, but this figure is seriously raising my hopes for 5POA Biker Scouts, Snowtroopers, TIE Pilots, etc. Thanks for revisiting FotD for these figures, Adam.

I agree the sculpt is great but 5 joints? Sorry Hasbro, with the new direction of 1990's level articulation and the terrible distribution and unappealing packaging of the black series, I have all but given up my beloved Star Wars collecting. If this is what to expect in 2015 for episode VII, I think I may be done for good.

Nice review. Has bro would be smart to release some multi-packs of these troopers.