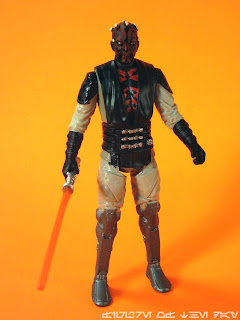 Bio: Jedi hero Obi-Wan Kenobi confronts the evil Sith Lord Darth Maul on the planet Mandalore. Obi-Wan has dueled Maul several times since their first encounter on Naboo, and must face him once again when Kenobi comes to Dutchess Satine's rescue.  (Taken from the figure's cardback.)

Commentary: Not every figure appeals to every collector.  But this one appeals to me, so if you don't like it tough!   I realize that's flippant but as I write this (about a week ago) I just got this Darth Maul in the mail and it's about 90% of what I want in my Star Wars action figures.  If I get hate mail for this entry, I get an extra +10% in spite joy points which brings it up to a perfect score - so go ahead and send me the nasty emails you so do when I'm happy.  IT ONLY GIVES ME POWER.

This Darth Maul figure - and indeed the story from which he comes - are a bizarre mishmash of things that I don't think anyone would've seen coming, nor asked for, five years ago.  Darth Maul got cut in half - he's dead!  And 5-jointed figures?  Kenner declared those out of vogue before relaunching Star Wars toys in 1995.  The fact that this figure exists is something of a small miracle, and I don't even mind that this particular Kenobi vs. Maul costume match-up never happened.  I get two good figures for ten bucks - I declare myself a winner here, and if you buy it I bet you'll enjoy it too.  Darth Maul's feel as a toy, in my pocket as he hung out with me, was like a toy that fell out of some alternate universe time warp.  The proportions, pose, and colors reminded me of a generic Jabba's Palace thug and I went to stand him up by Wooof and the rest. He fit right in.  He's the right size to stand on a Skiff.  Truly, this format is what people like me have been wanting all these years.

The figure itself is good, but not likely to knock a lot of socks off.  I find a lot of charm in his shortcomings - the five joints, the limited deco, even the tattoos not matching.  The body has a bright, pinker color while the face has a darker, more subdued red.  It feels like something old-school Kenner would've done, and to be honest I prefer the darker color overall.  The colors are more toy-like, less subtle than the animation model - all of those greys blurred together, while here there's a striking contrast between the faux-metal legs, the light grey pants, and the black gloves.  Sculpted detail is quite good, although the paint is a little sloppy.  I'm seeing some black splotches where there shouldn't be any, although it isn't hurting my love of the figure one bit since they're usually in creases or folds around the pants.

I have no reason to lament the lack of articulation because when it comes to 3 3/4-inch figures, I'd rather celebrate what we do have than mourn the spirit of something that may never come.  Sure, Maul with 16 joints would've been cool.  And yes, I'd have loved to see an Animated one.  But this is very nice - he stands and sits well, and he fits in the Sith Infiltrator vehicle better than most other Darth Maul action figures since 1999.   This alone gives him high marks in my books.  I love the idea of a rogue Darth Maul jetting around the galaxy causing problems, and Hasbro gave me a figure that has managed to get right in to my inner 9-year-old.  The quality of the figure - just in terms of paint - isn't up to Hasbro's usual standards, but it's not like I expect to see a better version of this figure down the road right now.  It feels like a post-Return of the Jedi toy and for that reason I really love it.   It could stand near the Fromm Gang or maybe a revived Grand Moff Tarkin or some other craziness, and as such it's very welcome in my toy stash.   I got my money's worth.

Can't say what you wrote is going to have me running out to stores to buy this figure. You just confirmed what I had already surmised. This is an action figure to skip. I was fortunate enough to score an animated custom of this Maul with the full articulation including ball-jointed hips. Take a look, this is how it should have done it if Hasbro wanted to get it right. All hits, no misses. This custom knocks it right out of the ballpark, complete with lightsaber hilts that attach to Maul's belt:

It's not like you're going to find it if you run out to stores. I don't like the custom one - the legs are all wrong, there's too much black wash over it, and it doesn't look like a toy from 1984.

I wouldn't want a toy from 1984. I'm 10. I have higher articulation standards. To each his own. I'll take these legs over Hasbro's. Hasbro's don't look better. My paint matches.

I love this figure, it meets my higher fun standards™.
charm > accuracy every time...

LOL.. That guy's custom looks like he used a G.I. Joe Sigma 6 as a base. Not a compliment.