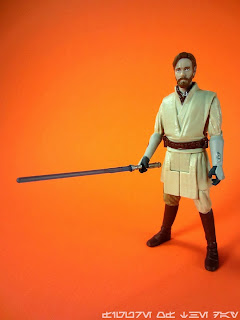 Bio: Jedi hero Obi-Wan Kenobi confronts the evil Sith Lord Darth Maul on the planet Mandalore. Obi-Wan has dueled Maul several times since their first encounter on Naboo, and must face him once again when Kenobi comes to Dutchess Satine's rescue.  (Taken from the figure's cardback.)

Commentary: Darth Maul is a solid figure - a new sculpt based on a never-before-made-as-a-toy costume.  His companion Obi-Wan Kenobi takes a few shortcuts, adapting the existing Saga Legends mold with new deco and new arms.  He still has 5 joints and can stand or sit relatively well, but it's worth noting it's an effort to cram him in the new, smaller Jedi Starfighters.  It shouldn't be - they should just fit if they're designed at the same time, at the same company.   If it's designed as a "kid line" there's no excuse for any compatibility issues if they nailed it back in 1978.

Hasbro seems interested in reusing a bunch of parts in this line, and this is a clever way to do that.  Modifying an existing movie figure to give me an Expanded Universe toy?  OK. I'm game.  The retooled hands have Clone armor wrists and can hold a lightsaber more easily.  The range of movement is about teh same, btu the color scheme is different.  Obi-Wan is less peachy and more ashen, his hair is redder and his outfit is a little less colorful.  The sculpting is still good, but not fantastic - you won't be wowed by it, but you will be delighted by it.  It looks good, the paint job is on the happy side of good as Hasbro painted his wrist communicator silver.  He's also got a Cody to hang out with, that's a bonus.  The open circle fleet symbol on his right wrist is also well-decorated, and I'm largely quite pleased.  Hasbro has done numerous "movie" versions of Obi-Wan in some sort of clone armor since 2005, and while this certainly isn't the most dynamic, it's certainly the most desk toy-friendly.

I've got an entire suite of Saga Legends and Mission Series toys on my desk as I type this, and not one of them has fallen over.  Vintage and Black Series figures usually topple over eventually due to the ankles or some other issue, and these figures just do what they're supposed to do.  They stand there, and they look good.  I realize it may be unfair to lavish Hasbro with praise given the lower expectations out of a kid-driven $10 figure 2-pack in an era of $11 single-carded figures, but I'm quite happy with these.   And yes, we'll look at more tomorrow.