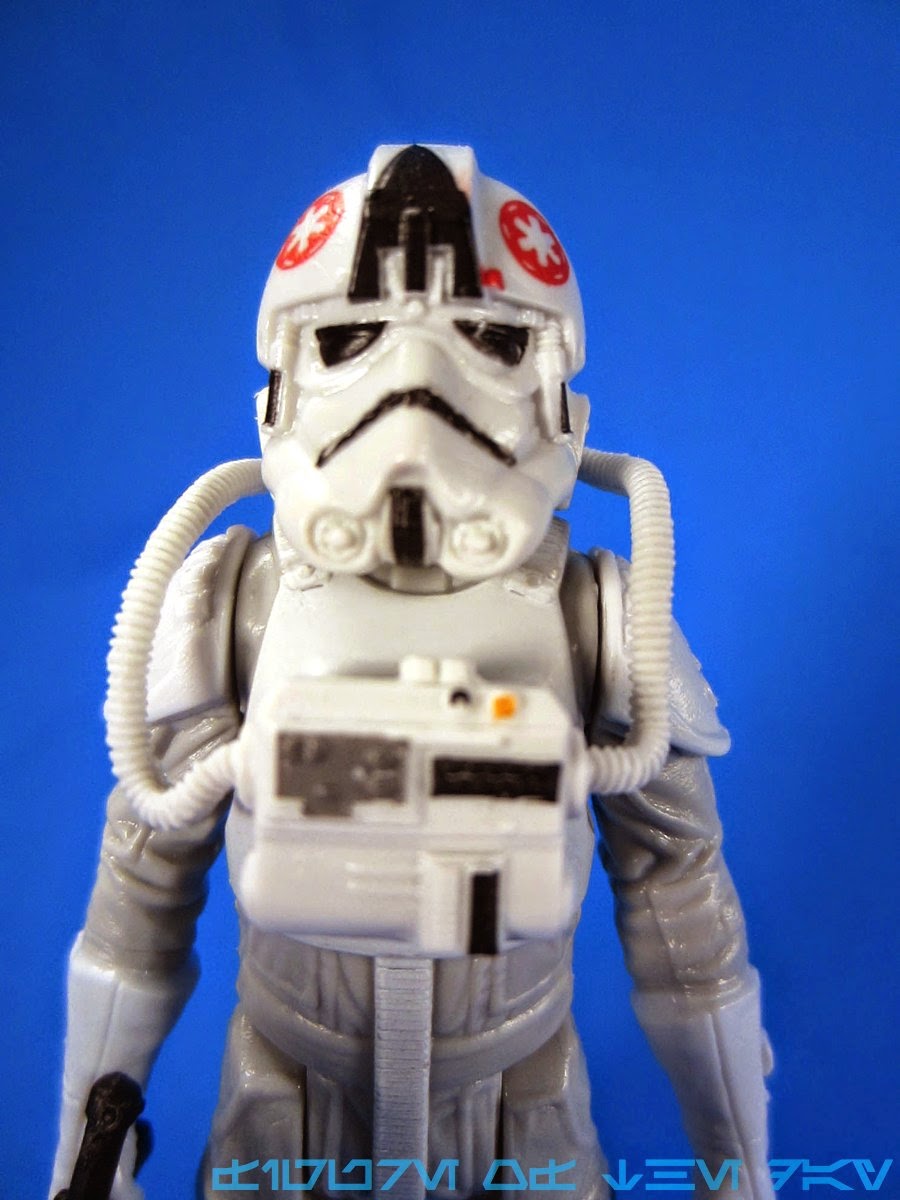 Bio: These Imperial drivers pilot the powerful All-Terrain Armored Transport walkers to destroy the hidden Rebel base on the ice planet Hoth. (Taken from the figure's packaging.)

Commentary: Carded AT-AT Driver figures have sold very well over the years, in part due to scarcity of sorts.   One was an exclusive, one was in short supply, and another was in pretty good supply but sold anyway.  The point is, on the whole, this figure sells which is the only reason I can see for Hasbro making a new one.  There is no AT-AT in the marketplace today nor do I expect there to be one in the next (at least) twelve months.  The last AT-AT we got was designed with bent knees in mind, so this 5-jointed figure really doesn't fit well in the driver's seat - the 2006 or 2009 versions are best for that.  The 2015 version with its 5 joints is ideal for the vintage, 1998, and 2006 AT-AT Walker vehicles.  Or perhaps a new one they're developing that we don't know about yet... or perhaps they put it out for the AT-DP and Imperial Troop Transport vehicles.  At least it's a pretty good figure. 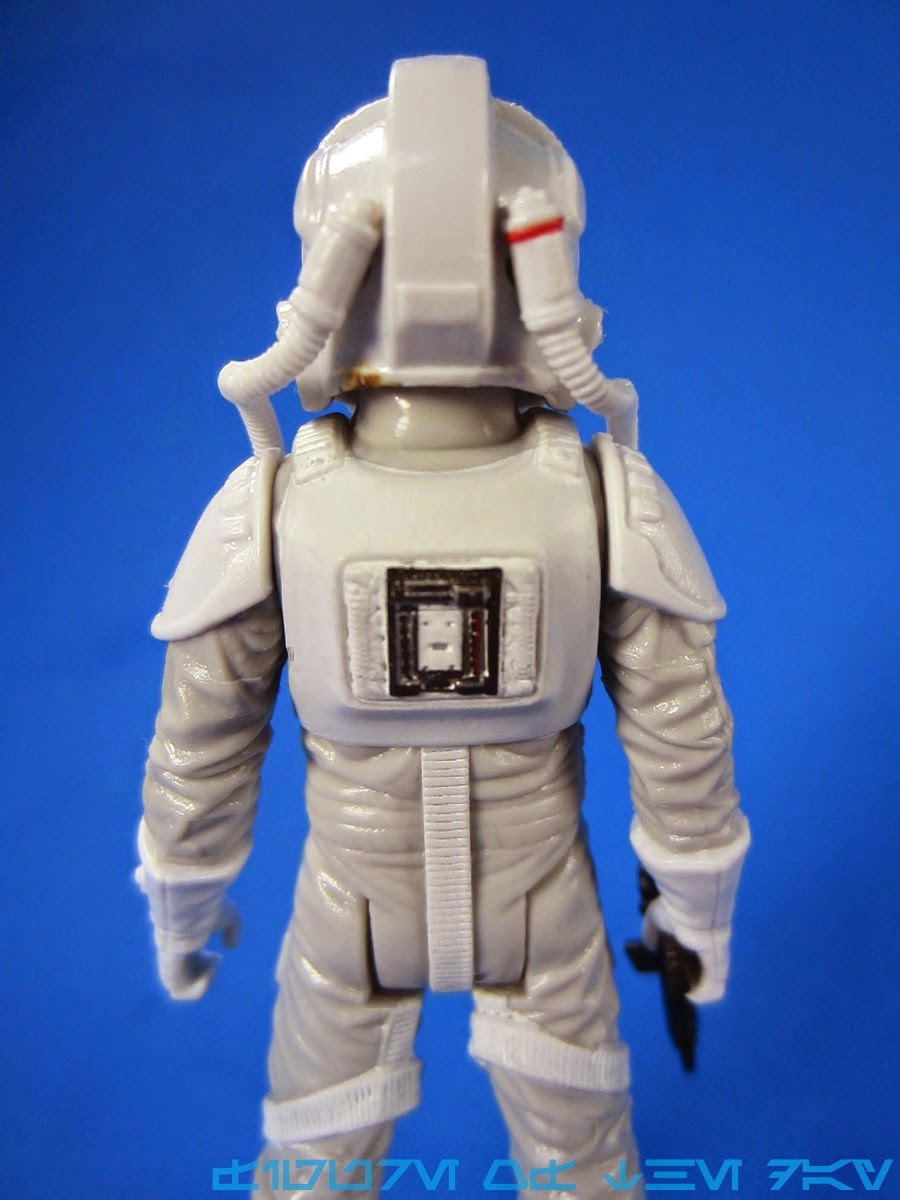 In terms of coloring it's consistent with other AT-AT Driver action figures and what fans believe they saw on the big screen - a grey suit and white armor.  Some resources and research indicates that the props were in fact grey and not white - the lights made them look white, though. The same resources indicate that they are mostly repurposed, repainted, and partially tweaked TIE Pilot suits and helmets, which explains a lot.  Given issues like the color of Han's coat and other toy-related perceptions, it makes sense that no matter the actual color of the props that it would be in everyone's best interests to keep the coloring consistent as nobody has ever really made a fuss over it, and having to re-populate our collections with new, correctly colored AT-AT Drivers would be obnoxious.  It might also be something we see in a few years.  Maybe they'll try grey when it comes time to do The Black Series version. 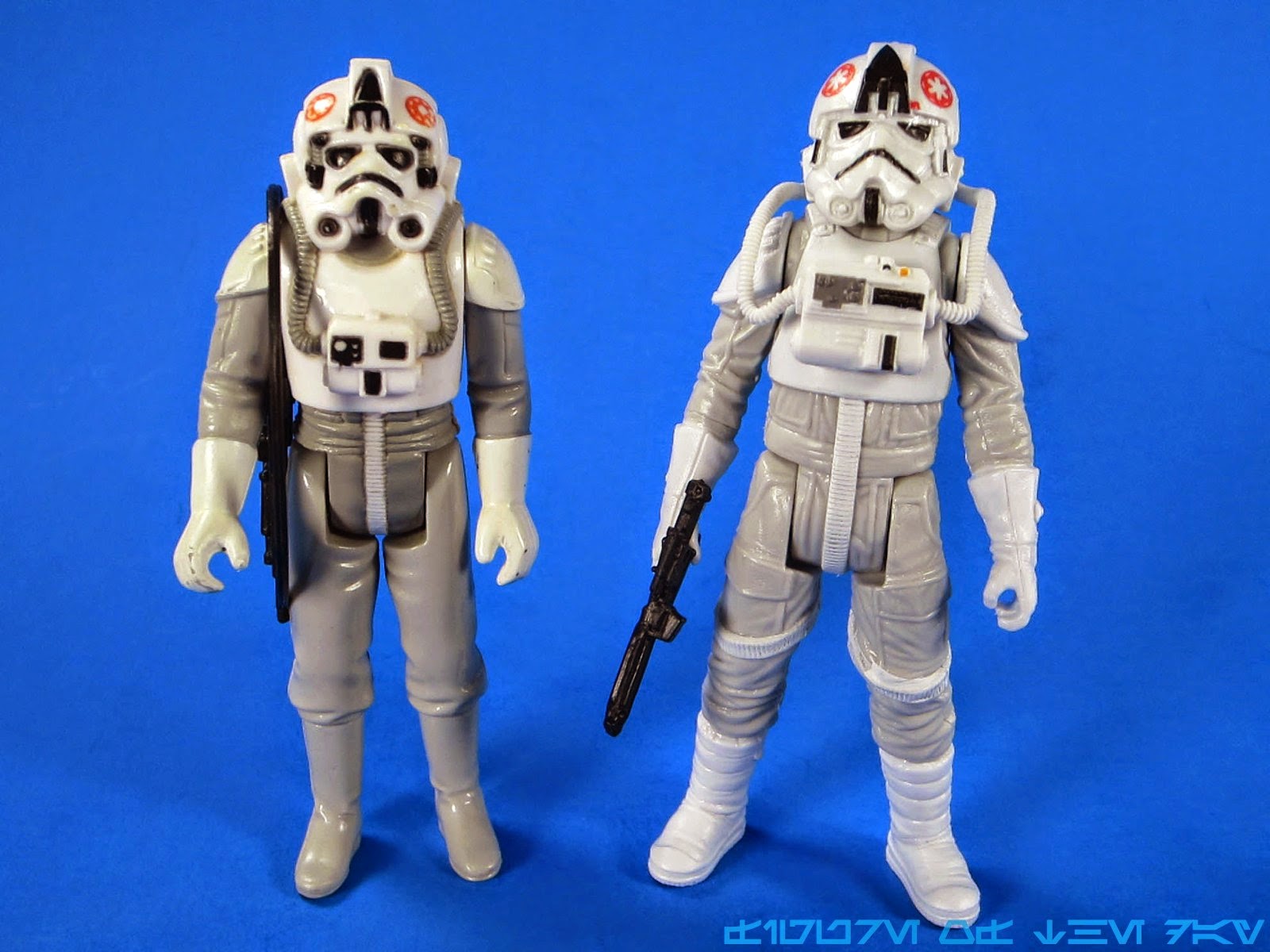 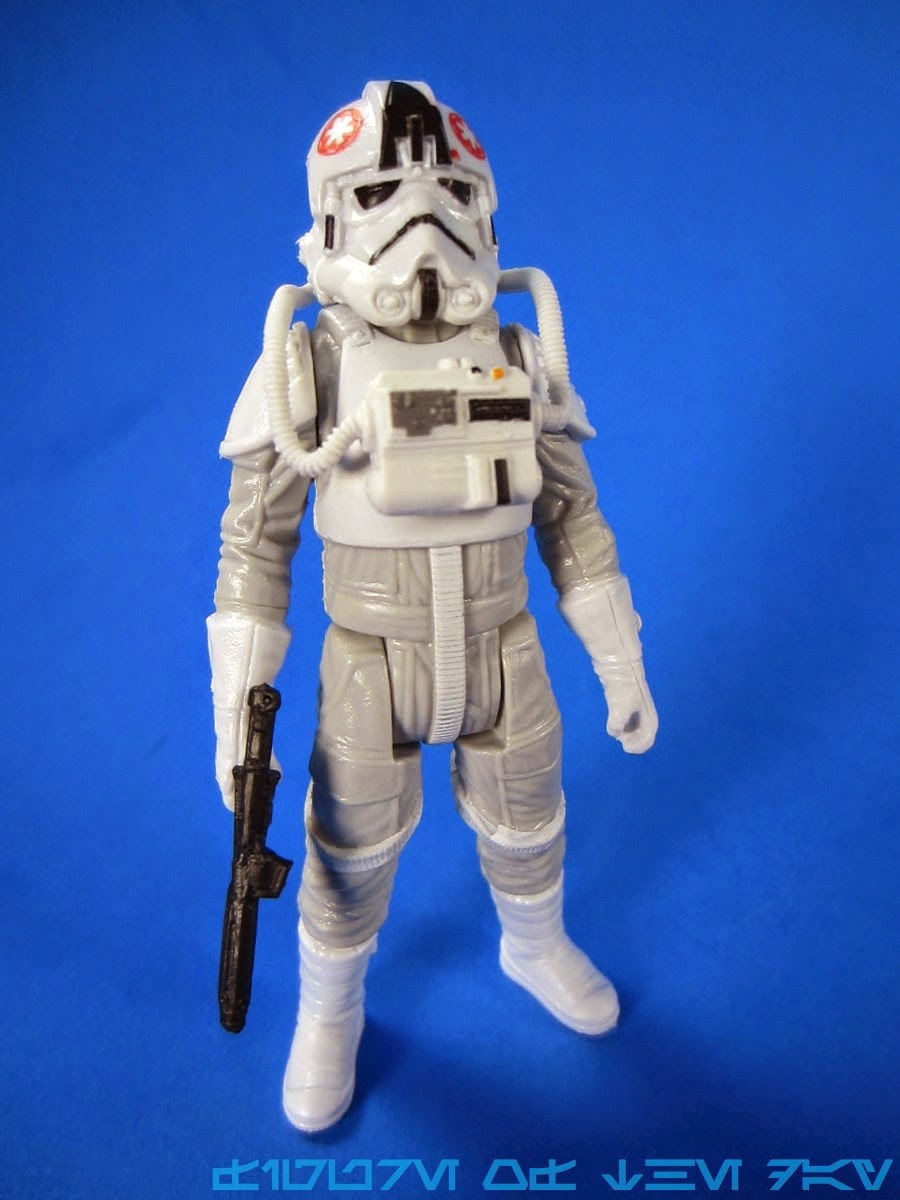 There are some center-of-balance issues as the figure has to be tilted back to keep standing, which is a knock against it.  The fact that it can't fit in the latest AT-ATs is a bummer too, as a "driver" figure in a kid-driven line really should fit in the most current (or next) version of the vehicle.   This figure is by no means bad, but it isn't as good as Hasbro's numerous other efforts which have been much better.  It's nice having the articulated neck and painted instrument panel on the back, but other than standing and sitting there's not a lot of demands you can make on this figure.

There are a few missing paint apps, but by and large the figure does provide a good, cheap impression of the costume without leaving the fan to scratch their head wondering why they left something significant on the table beyond the missing red stripe on the back of the helmet. (It appears on the cardback.)   As figures go this one is pretty good in terms of looking decent, but the playability of it does depress me a bit.  It feels undercooked, but at least the sculptors did a bang-up job making another all-new mold that turned out looking pretty.  I just wish it could stand and sit more easily. 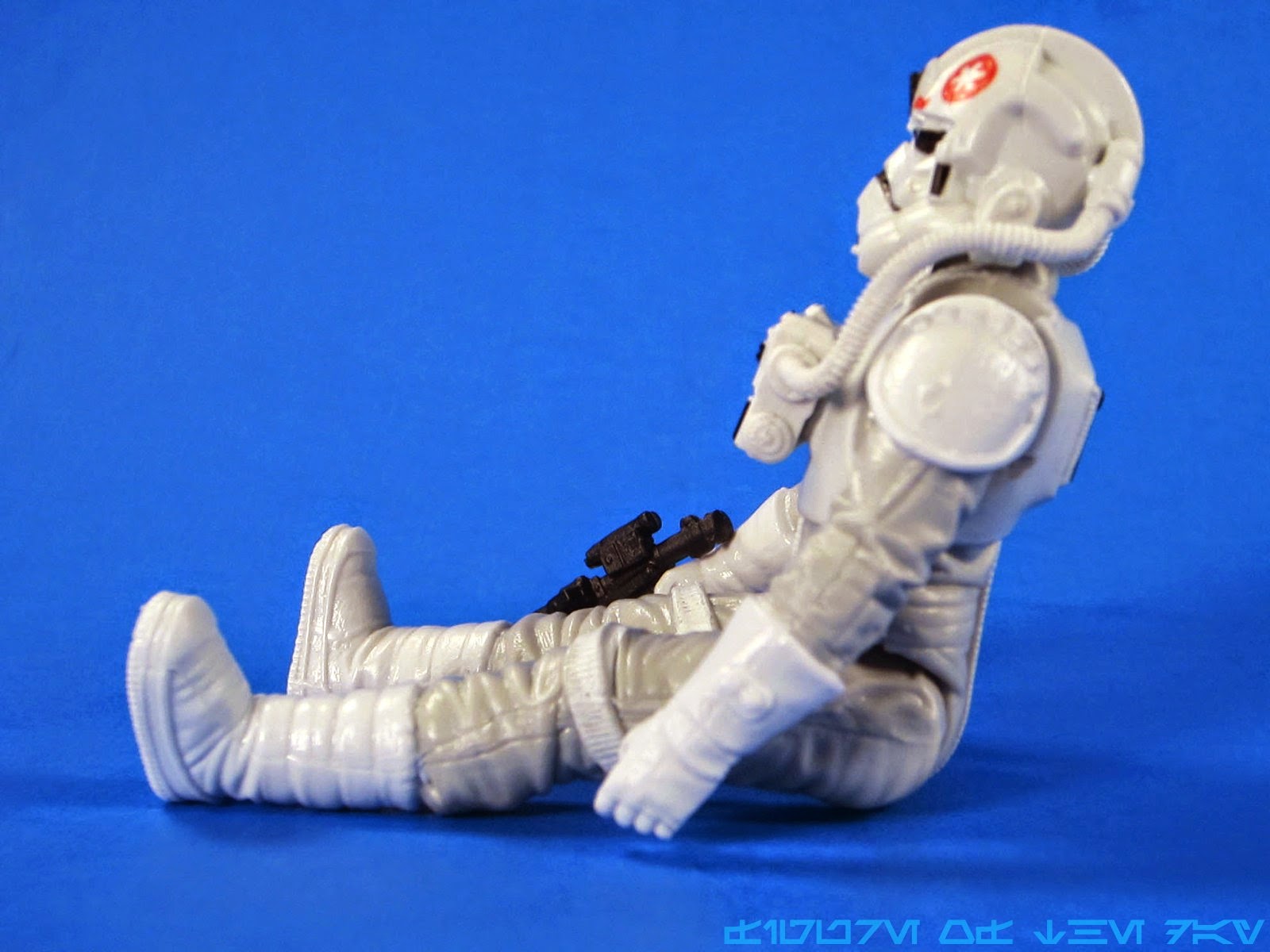 Collector's Notes: I got this from Entertainment Earth.  I started seeing this wave at Target and Toys R Us so far.  Also there was a joke - I assume it was a joke - at San Diego Comic-Con last year that this figure was the first time we saw the character's legs.   It flew by the audience and was absent from most reports, so I'm beginning to wonder if I misunderstood something here.

Re: seeing the figure's legs for the first time - I heard the comment by a panelist in the audio from the SDCC presentation, and I don't think it was a joke. I think the panelist just didn't know her Star Wars action figure history. If I recall correctly, she also mis-pronounced another character's name.