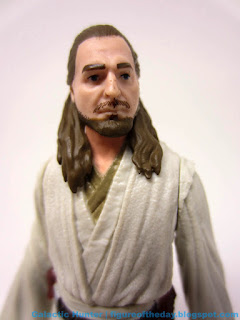 Bio: Qui-Gon Jinn was a male human Jedi Master born on Coruscant during the declining days of the Galactic Republic.  (Taken from Wookieepedia.) 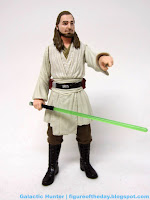 Commentary:  I was waffling between the new movie and old movies, but since I don't know anything about the new movie I decided to look on this surprisingly great Qui-Gon Jinn figure.  Hasbro has largely abandoned Lucas' era of characters, but when they revisit them we always get gems.   This Qui-Gon Jinn is right up there with Target's Emperor Palpatine last year - it's wonderful!  A cloak would have been nice but this taller figure with a great face sculpt is some of their best work.  The hair is carefully designed so it doesn't get in the way of the neck turning, and it doesn't look vaguely like a poodle's ears like the 1999 version.  It's like a tiny, decent Liam Neeson sculpture.

He's not super-articulated, but he looks better than the last super-articulated figure.  He has the typical 5 joints plus rotating wrists, and this is a decent choice.  His robes are more flexible, allowing him to easily sit.  The hand can hold the lightsaber, while his left hand has that great Force gesture that the 6-inch figure had last year.   While not identical, it's similar enough to the bigger figure to make it seem that they came from the same digital reference sculpt files. 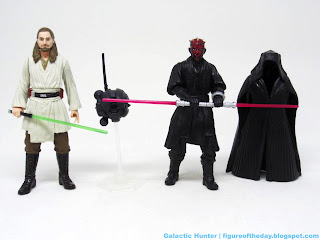 While lacking in the level of detail of the larger figures, the sculpt is still there and most of the elements are painted similarly.   This looks about as good as I could hope for a Qui-Gon figure at this size and price point, plus or minus a few joints - and at this point I'd say articulation quantity is overrated.  The fists don't easily pop out and the figure can actually sit, which makes it better than many.   I doubt any long-time collector actively thought they needed another Qui-Gon figure, but this is a big improvement.  It's excellent - and the Maul it comes with is no slouch, either.  Do yourself a favor and get this set.

Dude, he looks more like Ben Gazzara than Liam Neeson. The Qui-gon with the light-up saber has an infinitely better head sculpt.I even prefer the Eopie pack in.

Or Bert from Sesame Street!