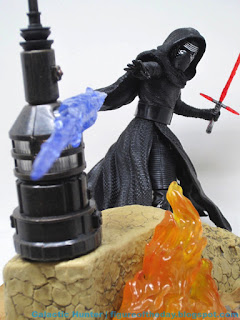 Bio: In service of Supreme Leader Snoke and the powerful First Order, Kylo Ren and a legion of stormtroopers invade Jakku in search of the star map that will lead them to the last Jedi in the galaxy, Luke Skywalker.   (Taken from the packaging.) 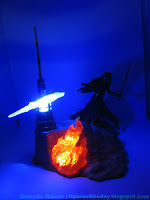 Commentary:  When I first saw the Centerpiece concept (and price point) I rolled my eyes and said "well, this isn't going anywhere good.  Some concepts haven't made it out, but the very best one that I was really excited to see can now be yours with Kylo Ren.   Doing new form factors raises questions like "Why?"  Hasbro has sold collectors no fewer than 6 total The Black Series 6-inch Kylo Ren figures since 2015, and there's lot a lot genuinely new to offer on most - this one took advantage of the form and gave us a movie moment we haven't really seen well-represented. 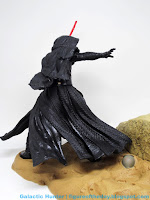 This time the figure has no articulation, and you have to plug in the flowing robes to make it work.  Once assembled you get some rock and ruins, plus the super-cool blaster bolt Poe Dameron shot at Kylo Ren in the opening scene of The Force Awakens.  Representing the Force is a tough thing to do in toys, but this does a bang-up job showcasing one of the most memorable moments of the new movie generation so far with a bright glowing blue bolt and some red flames... plus a lamp.   This is a toy that really feels like it makes use of the electronics and budget well, as opposed to Luke's weird attack run on Hoth or the not-quite-Rogue One Darth Vader.   The deco is great, and the lights are bright - push the button for 12 seconds of visuals, or hold it in for a few seconds and it stays on until you push it again.    It takes 3 "AAA" batteries and that seems excessive, particularly given that USB or another greener way of doing things would have been nice. 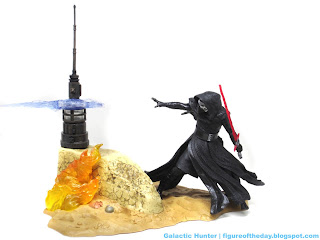 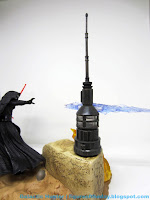 Kylo Ren lacks display options in the figure itself, but the base gives you the choice of putting one or both feet on to give him some distance from the bolt.  If you're hard up for shelf space this is particularly handy.   Space can be at a premium, especially now.   Foot pegs under the base allow you to plug in Stormtroopers to fill out the scene, were you so inclined.  I like having options.

Hasbro's sculptors did an awesome job giving Kylo Ren life with an action-oriented pose showing a quick turn and mastery of the Dark Side to save his neck.   The robe textures are some of the best in this line, and moving away from cloth gives us one of the best Kylo Ren collectibles yet.  He just can't move - what you see is what you get.   It's amazing with amazing detail in the arms, legs, boots, helmet, hood, and everything else - but if you don't love the pose, this is pretty much it.  You could also swap out another The Black Series Kylo Ren if you want, but I like this one here just fine. 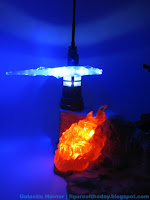 While it's pretty stunning and on par with some of the statues we get - except plastic - so as a statue, it's cool and priced well. As an action figure, it's a lousy deal - a $20ish figure, minus articulation, with a $30 base with a couple of LEDs seems nutty.   The final product does look excellent though - so I'd say Hasbro has justified taking your $50 here.   They made something really good here - even though it's expensive.   If you see it on clearance and don't buy it, I pity you.  I'd even say buy it at full price and hopefully Hasbro continues the line with scene-specific takes on things you might want like Boba Fett, or something relating to Han Solo in the Carbon Freeze chamber, or (if you'd let me) a multi-figure set focusing on the Kylo Ren and Rey team-up from The Last Jedi against the Praetorian Guard.  This format has potential for amazing things, if Hasbro keeps it going I bet it could turn around - much like the original 7-inch Unleashed line took a few waves to really kick off.

Packaging Notes: A significant improvement from the 2017 models, this one has a fifth panel box with velcro tabs and a ton of photography showing it off.   It just looks and feels better, like Hasbro took the idea and ran with it.   What we got before was the beta - this is a final release with a stronger pose and movie tie-in as opposed to the off-camera statues we got before.   This is the first Centerpiece toy - and one of very few similar items even when comparing it to the Unleashed 7-inch line - modeled after a specific movie moment.  It's much stronger as a result.

I don't collect 6", but I did collect the old Unleashed line. Would this look out of place displayed with them?

It's pretty close - not exact. I think it would look good nearby. Some of the Unleashed guys like Bossk were a little on the larger side.