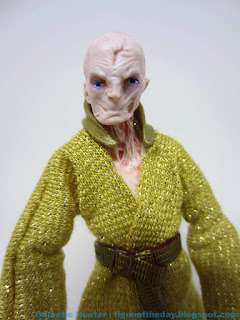 Bio: Snoke was a Force-sensitive humanoid alien who ruled the First Order as Supreme Leader approximately thirty years after the Battle of Endor.  (Stolen from Wookieepedia.  Packaging has no bio.) 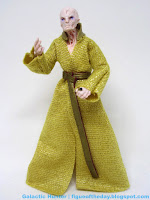 Commentary:  I was really surprised to see The Last Jedi wrapped up Supreme Leader Snoke's storyline.  (Look, if you didn't see the movie at this point I'm going to say you aren't a real fan.)   We barely got to see him in the movies, but he does have an important distinction - unless I missed something, this is the very first Hasbro action figure to sport The Last Jedi branding.  (They've been iffy about putting titles on many of the newer toys.)

Hasbro did a pretty good job here, my only real desire was for a figure that could sit and they came close. We got a guy with lumpy underthings under a gold robe and wacky curled toe shoes, possibly furthering the Hef analogy.  It's one of Hasbro's best executions of soft goods on any size, with snug sleeves and a decent, flowing gold robe.   The plastic belt - weirdly molded in red and painted gold, why? - dangles between his legs getting in the way of sitting on a throne a bit.  You can still move it a bit so he can sit, and with the great bend-and-swivel hands plus swivel elbows you're going to be able to get a figure that sits and emotes nicely.  He's a little light in facial detail, a pity given the price and lack of accessories.  I like the sculpting, but a little paint in the eyes or the scar would have gone a long way.  He's creepy and loosely recalls some of Karloff's monster make-up like a missing chunk of his face, making for a very good, very tall, and very creepy humanoid.  He stands roughly eye to eye with Chewbacca, for crying out loud - he's huge.

Given the simplicity of the design, the sculptors and seamsters did a great job here.  Everything is where it should be and the colors are about right.   I just wish the head had some more deco - and maybe the collar on the robe could be a material that blends with the cloth more closely.  It's not a huge deal, but it's visibly different.  Overall it's great, and is the only new figure in the first batch of six The Vintage Collection figures.  All of the rest have been sold at Walmart as The Black Series figures, for as little as $4.   This one hasn't - get this one.  If you haven't got the others, go get them too.