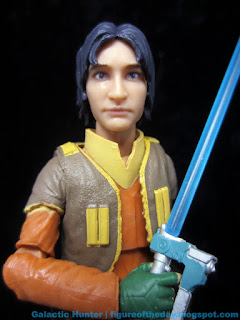 Bio: Growing up, Ezra learned to trust no one and to rely on his street smarts - and subconscious Force abilities - to survive.  The all changes with his introduction to the crew of the Ghost, a small band of rebels fighting back against the Empire.  Ezra comes to believe in their cause, and sees that he can help change the galaxy for the better. (Taken from the figure's packaging.) 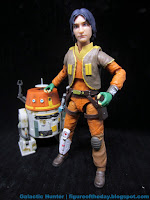 Commentary:  Really good!  I was surprised by how much I liked Ezra Bridger as a "realistic" figure.  The face looks a little cartoony, but that's due to the character's design.  He strikes me as a mix of Punky Brewster, Elizabeth Taylor, and 1992 Aladdin.  What's great about figures like this one is that Hasbro has some wiggle room to get creative.  At least I assume it's Hasbro, I don't know who specifically sculpted this one.  By departing from Disney's pre-approved 3D model for pretty much all of the merchandise, we get something that's different, more or less on-model, yet stylized in a new way that allows we the fans to wave away any concerns about it being a bit off.   As long as the general strokes of the costume are correct, everything else is going to be fine.

Ezra is appropriately a smidgen shorter, with very dark black with a hint of purple hair.   The costume is orange with a brown vest and yellow trim, complete with a very McQuarrie-ish bit of armor to match his trooper helmet.  The belts are more pronounced than the CG TV model, and his right leg has a hook for his staple-gun lightsaber.  While the gloves lack the white triangle from the TV show, it's not like I even noticed until I compared them.  Toning down some of those details helps the figure fit in with the movie-ish other releases a bit, too. 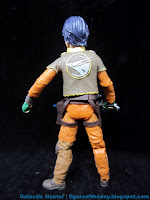 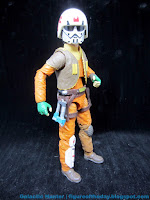 Articulation is on par for this line, as there's really not a lot of room nor call for improvement at this point.  You get bend-and-swivel wrists, double knee joints, and the usual.  The only thing missing from this figure would've been that weird little slingshot he's too old to be using, or possibly his backpack or another spare helmet.   You're getting your money's worth with this one if you're a fan of the show, and Hasbro has largely done an excellent job with its "realistic" takes on those animated figures.

Would be nice to have a Vlix to go with them, I'd say.