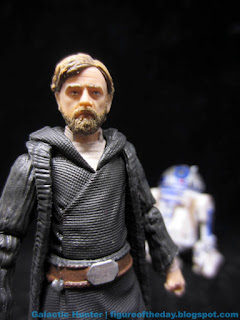 Bio: Luke Skywalker, a Force-sensitive human male, was a legendary Jedi Master who fought in the Galactic Civil War during the reign of the Galactic Empire. Along with his companions, Princess Leia Organa and Captain Han Solo, Skywalker served on the side of the Alliance to Restore the Republic—an organization committed to the downfall of Emperor Palpatine and the restoration of democracy. Following the war, Skywalker became a living legend, and was remembered as one of the greatest Jedi in galactic history.   (Stolen from Wookieepedia.  Packaging has no bio.) 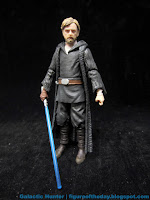 Commentary: This is a heck of a neat figure. Luke Skywalker (Crait) is utterly bizarre when you think about it.  Luke Skywalker projects himself across the galaxy with better hair, a darker beard, and probably a few less pounds too.   Kylo Ren and the Rebels saw him like this once - so maybe what they're seeing is in their own memories - but I think it's funnier if Luke decided to make himself just a little bit better-looking before he spiritually spanks his former student.  It's also kind of funny to think this is the Luke fans wanted to see - an active adventurer, lightsaber swinging, kicking butt and not particularly being bothered to take the names.  He's busy.

This Luke figure seems to be from a different era - it has some of the older problems we thought went away.  The robe is plastic, and the lower part of his tunic doesn't have a slit or any give in it.  Luke's legs aren't going to be doing much swinging forward. The ankles are normal, non-tilt ankles and the wrists are swivel, not bending wrists.  The neck joint is fine, and the ankles are set in a way where gravity might get the best of Luke like Kylo Ren never could. 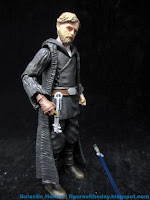 The hands aren't great at gripping the lightsaber - it doesn't take much to knock it loose.  I'm glad the lightsaber hilt has the ring on the back, and it can hang on the belt albeit a bit awkwardly.  It doesn't quite sit flush.  Still, they're both painted nicely and that's not something we get very often.  As an added bonus, the blue blade is black light reactive if such things excite you.

The sculpt on the outfit is good, with the shirt texture astonishing and the robe seems acceptable.  I like the gloves, boots, and pants - and the head is acceptable.  The reason for this is the realistic face printing makes the good sculpt look great, but the face printing has not been added to the hair.  Each Luke looks a little bit different, so keep an eye out when you buy yours.

I'd recommend this figure, in part because I don't assume the future holds a lot of 3 3/4-inch Mark Hamill-based Luke figures.  Maybe we'll get a ghost or something, but that's hard to know for sure.  Until then, this strange astral projection look is a heck of a cool way to celebrate our hero's last stand on Crait.   Hopefully we'll see him again soon.