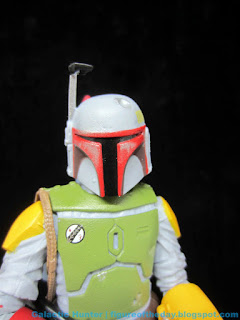 Bio: In 1979, Kenner created a Boba Fett figure based on photos taken of early costume tests, before the character appeared on screen in The Empire Strikes  Back.  The entire line was refreshed in 1980, and Boba Fett's coloring and package art were updated to match the rest of the movie's line.  The character became a fan favorite.  Now, Hasbro brings back Kenner-inspired coloring and art with Black Series detailing for a premium figure that embraces the legacy of the Star Wars saga. (Taken from the figure's packaging.) 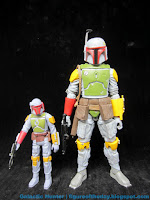 Commentary:  I am both excited and annoyed by this Boba Fett because I pitched it as an exclusive a few years ago.  Well, here it is! And it's great!  The 2013 figure is back with detailing specifically done to match the action figure with a little more paint to make it look slightly better.  It's that 2013 figure - itself a San Diego Comic-Con debut - with a little less paint.  You get the silver and red gauntlets, the blue gloves, the red rocket, the yellow knee pads, and the blue body glove.  Long gone are the special paint apps on the gloves, with a few odds and ends you saw on the 12-inch Kenner figure.  It's  not a perfect recreation of anything in particular, but it draws inspiration from the old and the new to give you something that's probably worth your while if you're old. 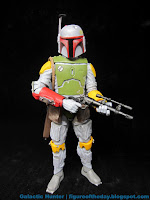 As accessories go, you get the blaster pistol and rifle from the original 2013 figure, plus a bonus Stormtrooper gun as a nod to the 1979 action figure. This is mostly good - Hasbro painted it with a silver flourish, but it would've been more exciting for the gun to be an all-blue blaster.  (Or an all-black blaster, either way is fine.)   It's also worth noting Hasbro left off the cape for this release - you can see the empty socket on the shoulder where it would have gone.

While the entire figure's look is inarguably Kenner-ish, the weathering is inconsistent.  The gauntlets and shoulder pads may show sculpted dents, but have no signs of painted weathering.  The helmet and knee pads have some signs of silver wear, as does the green armor.  It's a wonderfully colorful figure and thanks to the lack of media of the 1970s, looks more authentic than the real costumes.  Boba Fett was largely experienced through books, comics, and toys, so off-color interpretations were the "real" Boba Fett in the days before VHS. 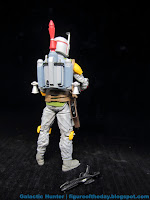 As a weird side figure, it's a good one.  We've also had the all-white concept armor in addition to a figure modeled after The Empire Strikes Back suit, leaving - for those of you keeping track of the kinds of things I ask for - the Nelvana Holiday Special/Droids look, the Return of the Jedi look, and the 12-inch Kenner/prototype armor look (brown gloves, more green, basically this figure's package photo.)  There's a lot of potential to make more repaints of Boba Fett, but I'm glad they stopped by this one first - maybe we'll get an even more amazing Boba Fett 2.0 mold some day with clip-on flames, jet pack fire, or other awesome extras.   Hasbro has been pretty good about pushing the nostalgia buttons in 2019, and this one leans pretty hard on what has come before - I think you'll enjoy it if you can get one for yourself.