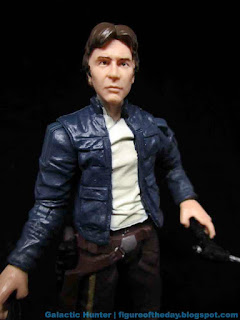 Bio:  Han Solo became a leader in the Alliance to Restore the Republic and an instrumental figure in the defeat of the Galactic Empire during the Galactic Civil War. (Stolen from Wookieepedia. Packaging has no bio.) 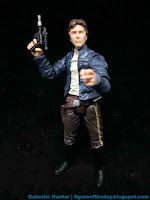 Commentary: At some point Hasbro decided that The Vintage Collection should be mostly reruns.  This is a mixed bag - the packaging gets an update, and sometimes the deco does.  But with Han Solo (Bespin), the stock photography stayed the same, or at least similar enough to the 2010 original that I would strongly advise buying it packaged and making sure it has the right item numbers.  (See the top of this review.)  There's also a big "4+" in a grey circle on the top left of the cardback - that's how you know it should have the new, updated head deco.

In 2011 the original release of this figure [FOTD #1,844] was as good as a Han can get, thanks to Hasbro forgetting to sculpt a thigh strap for his holster and allowing the figure's legs to swing forward and sit on the Millennium Falcon.   Han has 24 points of articulation and was great for the time - if Hasbro added in thigh cuts to the legs, I would see no reason to ever redo this figure at this size.   It's very good, and there's minimal room for improvement. 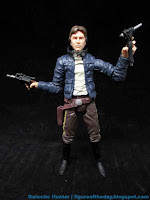 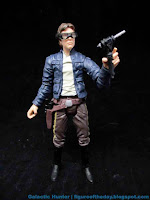 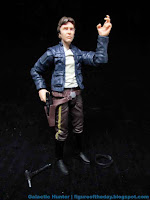 The 2020 release soars above the 2011 edition because of the head paint - there's a bit of eyeliner and painted lips that bring Han to life.  On my sample the eyes are bright and shiny, with clean eyebrows.   The hairline isn't perfect, but it's better than the last release.  The figure is otherwise basically the same as last time - it's good enough.  I'd recommend getting it if you can find it at a fair price, and he's joined by a General Lando Calrissian and Bespin Luke with similarly updated heads, and a C-3PO that is similar to the 2010 offering.   Han's good, though.  If you want the best, this is it - for now.