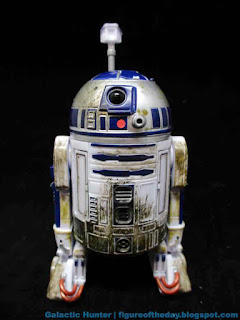 Bio: R2-D2, pronounced Artoo-Deetoo and often referred to as R2 (Artoo), was an R2-series astromech droid manufactured by Industrial Automaton with masculine programming. (Taken from the figure's packaging.) 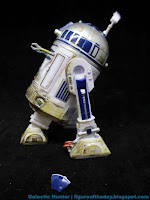 Commentary: It's different!  Artoo-deetoo (R2-D2) (Dagobah) is the start of Hasbro releasing retro Star Wars packaging with figures that didn't exist in that era.   While the 1978 R2-D2 and the 1982 Sensorcsope redux both appeared with this logo, the Dagobah photo was never used on the packaging and Dagobah swamp deco wasn't a thing back then.  It's different!

The figure itself looks good in the packaging, but due to the case configuration it's commonly crushed - mint bubbles are going to be a rare find.  Hasbro packed 5 figures into a case that could hold 6, so it would be easy for the cardboard to cave in a bit and this figure had no added support.  AFA-100-seekers, I do not envy you. 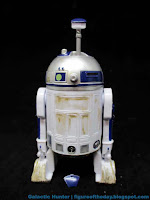 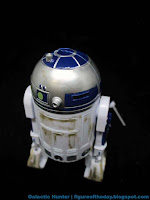 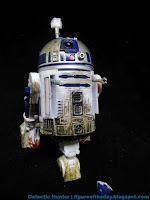 R2-D2 takes the mold from 2013, adds paint, and removes accessories.  It's a lateral move.  If you want the lightsaber hilt, the arm rockets, or the other scope, they're not here.  You can still pop off the 3 dome panels and 2 arm panels, but why?  The tabs on them weren't painted as well as previous releases, although you may not notice this thanks to the intense deco on the body.  While not quite as filthy as the photo, it's amazing - splattered mud on the body and limbs look great.  It wouldn't hurt to have had some paint on the third leg, but to recreate the two-leg pose on the photo?  It's fine.

The mechanisms all work as well as before.  You've got rolling foot wheels.  There's a third leg that retracts when you twist the dome.   It's fine - it's just not as robust as that first release.  If you already have it, you probably don't  mind the accessories aren't here, and the different dirt deco isn't bad either.   Since it's cheaper than the previous single releases and different than the "damaged" Amazon-exclusive version, you'll probably find it interesting enough to add to your Dagobah diorama display.  With a little more mud, it would be even better - but as it is, it's more interesting than getting the same R2-D2 on a new cardback.  It's a pity they skipped the actual 1982 Kenner Sensorscope cardback art, though, even if it isn't as appealing.   Hasbro made a sensible series of choices here.