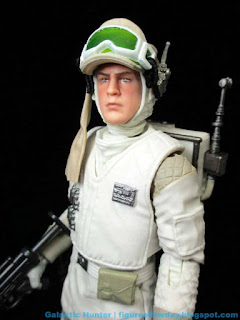 Bio: Rebel troopers, also known as Rebel fleet troopers, Rebel soldiers or Alliance troopers, were the front-line soldiers of both the early rebel movement and later, the Rebel Alliance in the early war against the Galactic Empire and later the Galactic Civil War. Initially formed from loosely connected resistance cells, the leadership of Mon Mothma saw them become an impressively armed and trained galaxy-spanning infantry.  (Taken from the figure's packaging.) 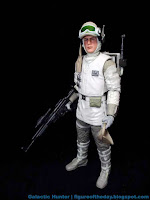 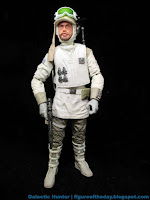 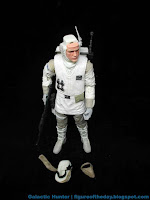 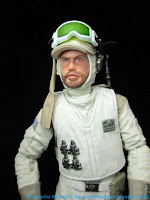 Commentary: The Rebel Soldier (Hoth) is so good, Hasbro may have been holding out on us.  We've had a lot of great figures in this format, but given Marvel often gets figures with more accessories and 1/6 of another bonus figure for the same price we've been wondering "Well, where's ours?"  It's here.  It's this.  This may well be the best 6-inch figure so far in terms of what you get for your money - it might not be your favorite trooper, but look at it.  It's amazing.  With 29 well-hidden points of articulation, this is a new high benchmark for what I hope we see in the future.

The new added shoulder joints are hidden behind the vest, and all the other bits you want are here.  Double-neck joint, rocker ankles, bend-and-swivel wrists, and elbows with the added range of movement.  He can hold weapons with both hands easily, and look good doing it.  And if you don't like the look on his face, that's OK - a Zartan-like alternate bearded face is hidden in his backpack for safe storage. 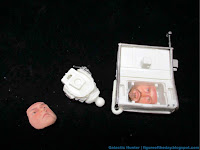 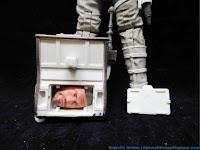 The sculpting and deco are phenomenal - the level of detail on the sculpted cloth are amazing.  The "hyperreal" face paint  on both is marvelous.  The only place the figure comes up short is the "damage" or "dirt" deco, but I don't miss it - I prefer it clean so we can add paint or grime as needed to make even more varieties.   It takes the best that many of the existing 3 3/4-inch figures had to offer and improves it with more gear, a better range of motion, the best sculpted detail 2020 has to offer, and marvelous joints that make it easy to pose almost any way I want.  What more could I ask for? 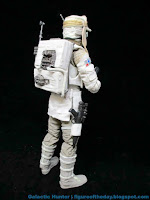 The head is interesting - the top part comes off, and the face plate pops off easily.  The top cap part holds the whole head together, so don't lose it.  It's very important. 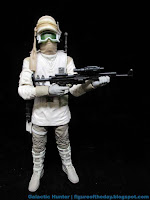 With the goggles, scarf, and faces, you can make 8 vaguely different-looking figures on a display with the parts at hand.   I doubt many of you are doing any sort of diorama making, but if you are, this is a good place to go.   Seeing how so many options were integrated here, I almost quiver with delight over what the Endor trooper may offer some day down the road.

This figure hits all the high marks - lots of options and on-figure storage so you may not have to lose anything.  Assuming he wears the scarf, of course - it would be nice to store that somewhere, but at least he can wear it.   Hasbro has very much outdone themselves here, and by including option parts you may want to be 2-4 of them just to display the various versions on your desk.  I'd say "get one," but why stop there?  Get at least two.   The figure will be in the new 2020-style The Black Series boxes again soon, so get one then if you miss this one.

Email ThisBlogThis!Share to TwitterShare to FacebookShare to Pinterest
Labels: 40th Anniversary, Rebellion, The Black Series 6-Inch, The Empire Strikes Back

On the plus side, this is probably how they'll do the 6 inch Zartan for GI Joe