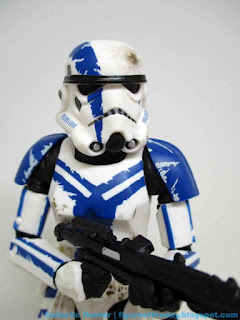 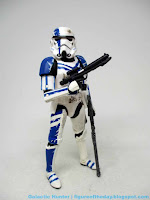 Commentary: Fan logic based on nothing keeps coming up.  "Nobody's allowed to make toys of anything not canon!" I keep hearing, which is patently untrue.  Hasbro and Lucasfilm will make what they wish, what makes sense - which doesn't necessarily mean Darth Revan is or isn't canon, and since we got a few figures from The Force Unleashed it only makes sense that we'll get more repainted Stormtroopers from the game like the legendary Stormtrooper Commander, which started life as a pre-order bonus for the game 12 years ago.  You'll be forgiven for not remembering as the figure mostly went out the back door before a subsequent reissue as an SDCC exclusive.  Despite being yet another Stormtrooper or Sandtrooper repaint - and there have been plenty - this one is gorgeous.  I love it. 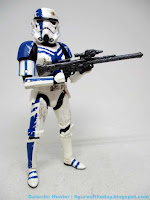 The figure's shiny white armor is now more of a matte off-white eggshell finish, covered in weathered blue rank marks and some of the best black blast mark battle damage I've seen out of Hasbro.   It's rare Hasbro tarts up the front and back of a figure with battle damage, but if you flip this guy over you'll see scuffs on the helmet, butt, legs, and arm.

The new-for-2020 blue markings on the 2013 mold look fantastic, with even more weathering and scuffing than in the game - perhaps even too much.   Hasbro could do another version of this figure closer to the game and because this one is a decent departure, I'd still be happy to see it in another flavor.  He has no problem holding his blasters, the holster fits the smaller blaster just fine, and the figure has about 29 points of articulation including a nearly perfect set of neck joints.  You can get a lot of poses out of this mold, which is good, because you probably already bought it a few times with more coming. 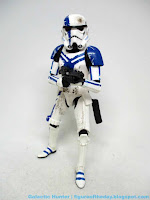 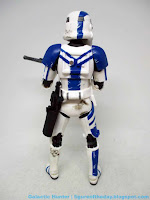 It's more expensive than it needs to be, but at least it had more paint and seemingly stiffer, better joints than previous releases of this mold.  If you can get one for $25, you should.   The figure adds nothing new in terms of toy quality, but given the growing line of game-specific figures it's probably worth future-proofing your collection with this guy if and when the Secret Apprentice gets a figure.

Collector's Notes: I got mine from GameStop's web site.

I'm up for any figures and with so many great non-canon characters from books and other sources I say go for it. This was a cool figure. I enjoyed the book as well. Great post.