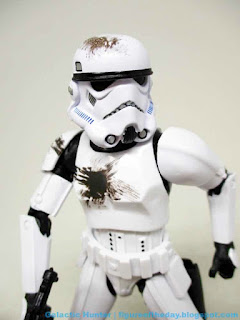 Bio:  Stormtroopers are elite shock troops fanatically loyal to the Empire and impossible to sway from the Imperial cause. They wear imposing white armor, which offers a wide range of survival equipment and temperature controls to allow the soldiers to survive in almost any environment.  Stormtroopers wield laster rifles and pistols with great skill, and attack in hordes to overwhelm their enemies.  (Taken from the box.) 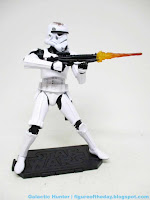 Commentary: Despite being a great idea, my Stormtrooper with Blast Accessories stayed in a box collecting dust on the floor in my office for almost two whole years.   It's a good idea - Hasbro took a $20 figure that fans want more than one of, added some improved battle damage, including a perfectly adequate stand, and tossed in three blast effects.  It's worth the $5 upcharge.

The figure itself is very similar to the individual boxed and carded figures you've seen before, as well as the various repaints.   What makes this figure unique is that Hasbro dropped the rifle and added deco.  The helmet, shoulder, and chest have some great damage on them, setting this trooper apart from the many other figures squeezed out of this mold over the last seven years.   The articulation is just as good, the white plastic is still great, and the mobility is good enough to keep you happy.  I assume you just want another one to add to your stash, and if you do, it's nice to build your armies with slightly different figures.   It's also not too expensive, despite being long sold-out. 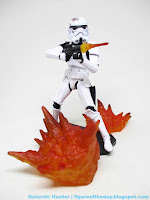 What makes it distinctive are its accessories.  The stand is a grey block with a Star Wars logo that pops out and can be reversed to show a pattern that looks like a wall on an Imperial installation.  Options!  It has two foot pegs, but interestingly also has hooks to connect to other stands.  As of my writing this, there are no other stands - this is it. 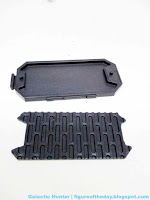 The more visible accessories are three fire blasts.  Japanese figure companies have been selling things like this to companies for years, but they're uncommon in Star Wars.  (Notably, Hasbro now includes them with many Transformers.)   These seem like a great fit to plug on the tip of the blaster, but the big explosions are harder to use - if you don't have some  big battle diorama, they do kind of get in the way.  They're nice, with lots of paint and color cast over translucent pieces, but where do they go?

I think sets like this are great.  Keep the figures in circulation, make some changes, add some gear - but maybe other accessories would be more fun instead.  Variant helmets, weapons for other figures, or more fireblasts for blasters - like a stun setting! - could be a lot of fun in the future.  Hasbro did a great job here, it's just that it's a good value and a great idea that's not immediately useful unless you're constructing a battle at home.   The stand is fine, but is ultimately not great - bigger, heavier figures require more support up top, otherwise they sag with time and fall over.  Having said all that, at the right price, I'd strongly recommend getting this to add to your armies - and maybe the fireblasts can be used if you do figure photography.

Collector's Notes: I got mine from Disney's web store.