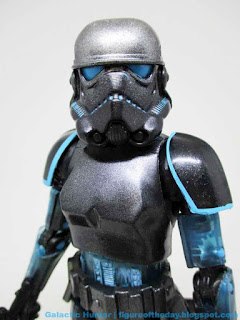 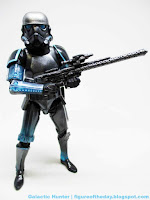 Commentary: Hasbro is sure getting the most out of this mold  before the new one comes out!  Shadow Stormtrooper legions attacked you in The Force Unleashed, a game for the PC, Xbox 360, PlayStation 3, Wii, and a few other systems.  It was pretty cool - and it was also previously sold as a 3 3/4-inch figure as a Toys R Us exclusive.  While the figure was released in 2020, the character design is nifty in how dated it is. 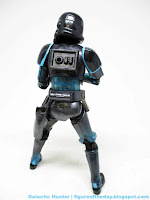 Over the years, you sometimes hear people clamor for things and then it just kind of fizzles out - Indiana Jones toys come to mind, and peoples' alleged fandom for and love of all things Tron.  Some people love it, but more people say they love it.  The movie's sequel received a not-entirely-surprising amount of fanfare and the stylish designs and costumes certainly inspired a whole lot of people - including game developers.   This Stormtrooper seems to draw influence from the late '00s, with a dark body featuring blue outlines and highlights.   It's a great looking figure, but much like faux woodgrain dates things to the 1970s, this is very much of a specific era.

The figure itself is just the same basic Stormtrooper mold, cast in clear, and covered in black, silver, and seemingly sparkly paint.   Out of context this should be a hit with fans of the high-end Kaiju sofubi figure scene or indie designer toys as well as fans of the 2008 The Force Unleashed video game.   The figure itself doesn't feel too Star Wars-y in how it looks, but then again, neither due the bright orange and blue uniforms on Star Tours. I don't know why Hasbro dragged its feet so long to do weird Stormtrooper repaints, but now they're here and they're welcome.   With a $5 premium price you might not want to troop build this one, but it's certainly good enough to warrant grabbing one to add to your growing "Gaming Greats" stash. 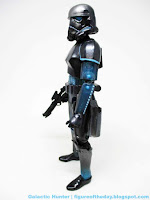 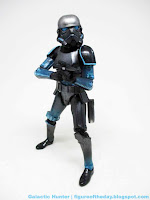 Collector's Notes: I got mine from GameStop's web site.