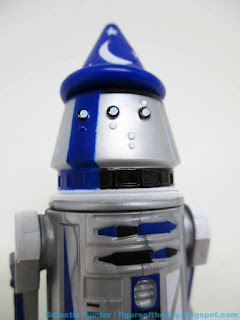 Bio: All different types of Astromech droids populate the Star Wars galaxy.  Each droid is different and has their own unique personality and colors.  Living on the planet of Lothal, this Astromech droid serves in the local marketplace of the Capital City.  Join R5-D23 on his adventures throughout the galaxy!   May the Force be with you... and your Droids! (Taken from the figure's packaging.) 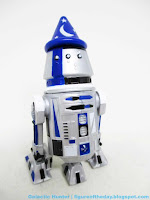 Commentary:  Behold, the first (I think) figure I forgot I owned and almost re-bought!  R5-D23
was sitting about 10 feet away from my desk on some shelving I got from Toys R Us before it closed since 2017.  A lot of droids came in all at once so I put off reviewing some of them until later - much later - and this one was still carded until a few weeks ago.   It wasn't nearly as ornate as R4-D23 [FOTD #2,184] and for some reason, his hat doesn't have the ears.  Aside from that, it's your garden variety convention exclusive redeco.   Yeah, we're going to do some more droids this year. 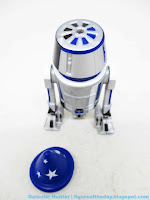 As with the rest of these guys, you can pop it apart at the dome, legs, and central leg.  You can swap parts with hundreds of other droids from both Hasbro and Disney.  There's a hole in the head, and it can wear hats.  When you pop the head off, you can see sculpted but unpainted silver detail.   The feet are of the latter Disney variety, which is to say they lack the cables over the front of the "toes." 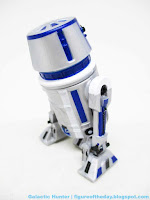 Like the series Rebels from which it is allegedly off-camera, the figure is a bit brighter and shinier, looking more new and like something from the concept art sketchpads.  Silver, blue, and white markings make the figure look like it could be floating around in the backgrounds.  It's not bad, but it doesn't seem like it necessarily is a lost part of your collection, or that it fits in with some toys you already bought unless you're a full-on droid fiend.  (And I hope that you are.)   It looks like it should belong somewhere specific.   There's a nifty white panel with a grey line slashing through it, which almost looks nautical.  The seafaring theme is furthered thanks to various blue seas of paint on the figure's head and  body, and lighter blue filling its three eyes.  This can only mean that the figure is an employee of H. Salt Fish & Chips or Long John Silver's.  There are also very subtle white caps on the figure's legs.

This figure is rather expensive and, I would argue, not as cool as R4-D23 from a couple of years earlier.  I am surprised the prices for the special Disney droids have started climbing, so get them if the price is good - anything orbiting $25 shipped should be considered more than fair given its retail price, taxes, shipping, and the tape and shipping box.  Higher prices than that are entirely up to your preferences, and you could probably use another robot right about now. 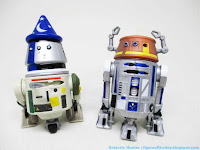 Collector's Notes: It's been so long I can't remember who got this for me.  Thanks Max?