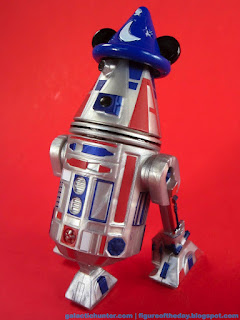 Bio: All different types of Astromech droids populate the Star Wars galaxy.  Each droid is different and has their own unique personality and colors.  Living on the planet of Coruscant, this little Astromech droid frequently visits the local droid spa for oil baths and recharging.  Join R4-D23 on his adventures throughout the galaxy!   May the Force be with you... and your Droids! (Taken from the figure's packaging.) 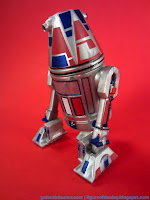 Commentary:  While wildly unnecessary, the   R4-D23 figure is overwhelmingly different from things we have.  I've got a lot of droids - and by that, I mean all of them - and even though we've got two silver R2-D2s neither of them have this kind of marbley plastic.  I'm not sure if I should be worried or not for its future (I've got an Electro and mine is still OK), as even Hasbro has addressed this topic as of Comic-Con this year and mentioned their awareness of the issue not being a problem for their upcoming new version of Generation 2 Superion - a Transformers jet combiner robot with a penchant for shattering in spots.  Silver and gold swirly plastic are a thing many of us fear, is what I'm getting at.   It looks good, but it's possible nobody should touch this figure in 10-15 years. 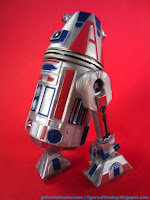 Enough of the doom and gloom - as far as the now goes, this is a neat figure with a silly story.  Is the droid supposedly autonomous?   That seems unlikely as droids aren't exactly free citizens so much as a mechanical pre-The Matrix or pre-Judgement Day mechanized slave class ready to rise up and crush their oppressors.   I have proof.   This one mixes and matches stencils from other figures, giving us a rather rich paint job incorporating special stripes on the feet and legs, the unique "A" shape on the dome, and some (I believe) unique-to-this-figure blue greebles on the legs as opposed the usual silver.  Or unpainted, if the budget warranted that.   The blue and red don't exactly pop against the silver plastic, but rather sort of fade into it giving the figure a worn-in look despite being shiny and new.  It's nothing if not charming. 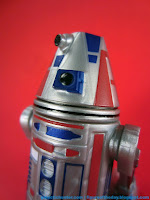 I should also note the back of the figure is extensively painted too blue borders on panels unpainted, white, and red all exist and look pretty great.   I also get why Hasbro left these out more and more now, because most fans probably won't flip the figure over to look.  The only real reason to look at the back of these figures is to ask yourself if they had added any detail there, and most people will never care.  Unless, of course, there's an action feature back there - and this toy's only real feature is its construction element.

His Sorcerer's Apprentice hat - complete with mouse ears - is actually a little different from the ones in the bins for the build-a-droid program.  It's a lot glossier in the blue segment, leading me to believe it may be painted.  The interior of the hat is still a dull blue, but the exterior may have a clear coat or blue paint job.  I'm not going to scrape it off to test, but if you put the little hats from the bins next to it, this one is clearly different.   I'll probably display it with the hat because it's part of the set, but it doesn't quite look so great.   I'm not quite sure where this would go in a diorama other than to put him with the rest of my droids,    And that's a perfectly reasonable place for him to go, really.  I got a lot of droids.  At this point what I really need is some sort of giant Sandcrawler-shaped shadowbox on my wall to display them all.

Collector's Notes: I got this from long-time reader Michael, and I thank you for your assistance good sir.  Also: eat, drink, and be merry.  For tomorrow, we buy.  Also you can get this one pretty cheaply between Amazon and eBay - $20-$25 shipped isn't all that unusual.  I know it's not cheap but $25 less 15% for whatever transaction fees and $5 or so shipping, well, it ain't terrible.