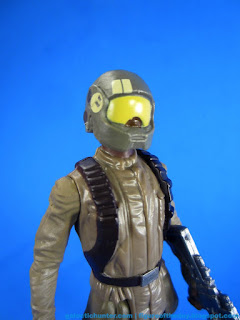 RESISTANCE TROOPER And not someone else in disguise
The Force Awakens   Jungle and Space Figures
Item No.: Asst. B3445 No. B3451
Manufacturer: Hasbro
Number: n/a
Includes: Blaster, big cannon with articulated bicycle grips
Action Feature: n/a
Retail: $7.99
Availability: September 2015
Appearances: The Force Awakens

Bio: Soldiers of the Resistance are well-trained and well-equipped, but they must rely on hit-and-run tactics when faced with the overwhelming might of the First Order. (Taken from the figure's packaging.   Again, not very helpful.) 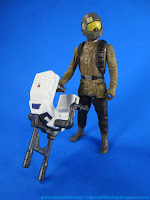 Commentary:  Hey, a trooper!  Maybe - many have speculated that Resistance Trooper is another character in disguise.  I assume this is only because of his ethnicity, but it's worth noting that a) Finn's skin color isn't the same as the Trooper, and b) they are the same height.   As far as I know I haven't seen this guy in the press yet, so I'm doing something that is absurd on so many levels - I'm reviewing a figure of something from a movie I haven't seen, whose identity I'm not sure of, that doesn't look like anything I've seen.  For all I know Hasbro made it up.   And there's a part of me that thinks I may forget this figure exists before I see the movie. 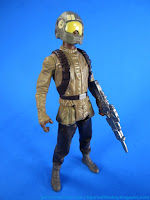 The figure has a non-removable green helmet with some markings that, well, don't tell me anything. His opaque yellow visor conceals his identity, be it as a generic army builder or a disguised warrior.   Were this another action figure line I'd probably praise it for making a generic trooper not white for a change, and then complain that it's a green-costumed trooper that doesn't have the articulation of a G.I. Joe.  If anything, it feels like a mutated Rebel Scout from Endor's concept drawings.   It's like something you've seen before, but not quite the same - and if Hasbro really did design it on their own, I'd say I mostly like it.  The costume, like Finn's, doesn't seem at all outlandish outside of the helmet.  If I saw someone wearing this - minus the suspenders - I wouldn't think anything of it.  Green shirt, brown pants, it's decent.  I like it. 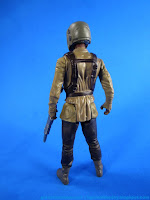 He stands and sits just fine, with a better range of leg movement than most other figures.  You can fit him in vehicles with little difficulty, and he can hold his rifle in either hand with no real difficulty.   The sculpting is good, but there aren't a lot of creative flourishes here that I can identify just yet.  If Hasbro embellished something, or got it wrong, I have no way to know this - and neither do you.   We can just take it at face value that this figure is worth $8, and I suppose as a collector that goes without saying.  If this was the equivalent of a Naboo Trooper, I'd say it's less fun just because it's not particularly exciting to look at.


His "Combine Weapon" is a giant gun.   He can't stand and hold it without assistance, because it's too dang heavy.  The double-barrelled weapon has three grips, so you've got options.  It mounts on top of a "chair" from a TIE Pilot, with Poe Dameron's wing pack clamping over it to make a cannon.  I like the resulting build - it's not goofy and it doesn't feel forced.   It's also not in the movie, so we're getting a glimpse at Hasbro's creativity as weapons go.   I would assume the fact that we can look at it and immediately say "This is clearly just a toy thing" speaks wonders about why the design really doesn't work, and the gimmick to excuse a $2 price increase just isn't there.   A $6 figure with 1 weapon would be more enticing and a better impulse buy, especially for a trooper. 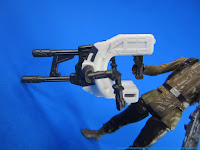 Having said that, this is a good figure - I like having a figure from a new movie too.  But what is it?  I don't know.  Should I care?  I don't know.   Will I touch this figure again after I hit "post"?   I really don't know.  But it's well-executed, whatever it is.

Sorry for the pun, but I can't see past the canary yellow visor.