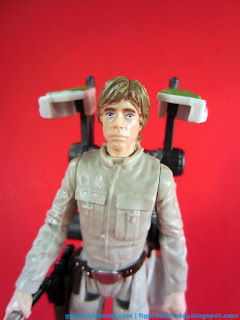 Bio: Determined to rescue his captive Rebel friends, this young Jedi-in-training must face Darth Vader and confront the truth of his father's fate. (Taken from the figure's packaging.  The bios are getting a little too silly trying to hide spoilers now, aren't they?) 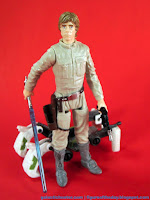 Commentary:  You've seen this Luke Skywalker before - it's a repack of the 2013 Mission Series figure.  It has new deco and has been retooled with a backpack hole for Luke, so he can now use the confusing contraption included in this set.  I'm jumping to this one before doing other new dudes, because let's round out the Jungle Weapon Trio.

Luke is, for all intents and purposes, the Mission Series figure with a hole and a new gizmo.  The coloring is so similar I'd almost assume they came from the same line.  You'll see slight differences in the on-spotness of some silver buttons and the hair highlights, but that's the kind of batch variation you'll see in any mass-produced toy.   The eyes are painted nicely, the face looks good, everything is where it should be - and it may be my imagination, but the new Luke seems a tiny bit less glossy.  It's no big deal, nothing really to worry about.  You can tell them apart by the hole, and that's really the only distinguishing detail. 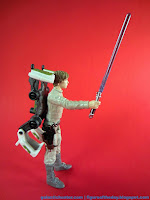 The nameless weapon is a backpack.  It fits Luke thanks to the back hole, and it has 8 moving parts - that's more than Luke!  Each limb has a dark grey piece that rotates, and a white piece that also rotates.  I'm fairly convinced this was designed by someone who wasn't really considering how it would fit the figure, because the little diagram on the packaging has a small gripping claw shape holding on to Luke's lightsaber by the blade.  Obviously this works as a toy, but it's a fantasy-crushing mechanism - not unlike having to remove a figure's head to put on a piece of armor, it just seems bizarre and wrong to hold an energy blade by the part that cuts you. 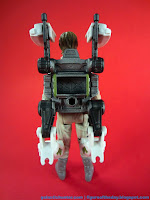 The top of the backpack has two solar panel-esque things that work as shoulder pads.  The bottom part has a couple of things that... uh... I'm not sure what these are here for.  They can hold Luke's lightsaber, sort of, and also serve as feet for the ugly turducken created by the three weapons.  They did a nice job painting it, adding green and some silver.  But it also feels like it was derived from a completely different era/manufacturer/franchise, and having a reduced articulation action figure line with an accessory featuring a greater number of joints like this does bother me a great deal.   Accessories cost money, as does packaging.  Putting resources in to a figure should pay off, and in this case I think they'd have done us a solid by just repacking Luke so kids can have a Luke.  The backpack doesn't seem to serve a function - what is it?  It doesn't seem to be a jetpack, it doesn't look cool, it's not here to hold Yoda, it doesn't seem to be a weapon... so what is it?  Why is it here?  I hope there's a story about how a cost reduction or other aspect of the unfortunate realities of secrecy and/or factory problems can explain to me what this is and why it's here, because the white parts pop right off and I can't say that I find it fun. 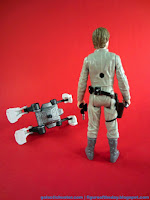 If you bought this Luke figure before, your only reason to buy it is because of a compulsive need to own all Hasbro Star Wars variants and accessories.  The figure itself is quite nice, but not different from the one you already bought - and as someone who grew up with weird Kenner contraptions for The Real Ghostbusters and Batman for years, this feels like an ill-informed attempt to duplicate that kind of success.  These items don't serve much of a function, nor do they look fun, but here they are - costing all of us an extra buck.   The funny thing is I actually do like the figures, the new designs, and the line as a whole - I just don't know what it is Hasbro expects kids to do with these bizarre weapons and gear.  (The masks/helmets in the other assortment, those I get. That makes sense.  These, no.)