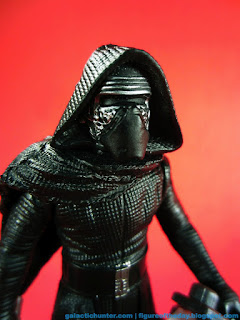 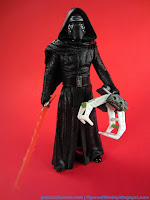 Commentary:  So it's come to this: nonstop essential action figures. Kylo Ren has at least 3 figures right now, possibly more, because we're seeing stuff roll in and we don't know exactly how many waves are out there.   I'm not just saying this as a fan, but also as someone in the business - we were kept in the dark, so some of this is as much of a surprise to me as much as it is you as you go out and look at toys this weekend.   I had to open this figure first because I wanted to know how the character that ripped off a name of another figure I'll probably never get now (Kybo Ren) turned out.  The answer - pretty good.   5 joints, 2 accessories, pleasing deco and top-notch sculpting.   If you are not opposed to the fact that a figure can have 5 joints, you will find this one to be pleasant.  Unless it turns out there were some massive changes in the movie design, anyway, as far as we know this Empire fanboy/Sith wannabe/Dark Side cosplayer/legitimate threat turned out well. 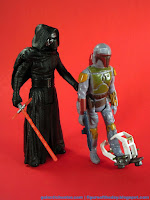 I spent a lot of time with this one, looking it over and trying to pick out some interesting features of the design.  And boy howdy, did I find some - this feels both like a proto Darth Vader and a reincarnation.   Little bits of the Emperor and Maul seem present as well, but the thing that really struck me were his mummy-like wrapped hands with horizontal bands around the arms and gloves.  The original 1977 Darth Vader costume had the same kind of detailing, as did Dark Empire (comics) Luke Skywalker to a lesser extent.  The body and hood are not unlike that of Palpatine, with a big shiny belt and boots that are probably just boots.   A bit of a hood/cape/shawl hangs off his head, a piece which can be removed easily as he has a ball-jointed neck that pops right off.  The figure has big, bulky robes not unlike the ones you've seen in Saga Legends and Mission Series since 2013, with big and bulky pant legs that are designed to sit at a 90-degree angle.  Well... maybe 100-degree.  It's close.   He has no problems holding his accessories, and his boots are glossy too. 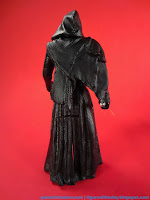 The sculpting is very good - consistent with The Black Series at its best.  The textures in the fabric are quite good, with lots of little wrinkles and a quasi-grid pattern covering his main garment.   The hood and cape exhibit a similar texture, with some tattered edges.    I love the face mask/helmet, as it looks almost like it could be hiding a Plo Koon-style breathing mask in there or could be the "flowing silk" described by the early drafts of The Star Wars from a long time ago.  It fits - and the visor with its silver bands around it fit, too.   I have no idea who the character is - or if he's any good - but as a concept design he's fantastic.  If this was a figure from an Expanded Universe line or an original Hasbro or Kenner idea to expand the line beyond the films, I can't imagine anyone would really have a problem with it.  This really looks like a different generation of bad guy, while maintaining the vocabulary of previous popular Sith Lords and not wussing out like Count Dooku's design.  (I like the character... but the outfit is boring.) 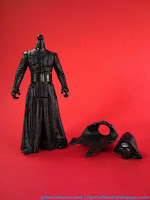 The placement of the joints is about as good as we might expect - I suspect there's room for improvement with the hips, but the shoulders and pop-offable head are all fine.   The hands have no problems holding the lightsaber, which is a red clear plastic piece with a dark silver painted hilt.  The exposed wiring is not decorated individually - cost-cutting - but you will find the wild red bands around the blade itself.   If you were like me and wondering just what the heck they could do to make a lightsaber interesting, well, this is it - the cross guard is an added bonus, but they probably should have picked one element first and saved another for a sequel.   This figure has zero problems standing and while he can sit, he failed every vehicle test I gave him.   My standard for excellent is "The Landspeeder Test" - if a figure can sit in a landspeeder, the articulation is usually good.  Due to the wide robes, he won't fit.  He also won't fit in the Mini-Rigs I tried, the Droids Side Gunner, any of the many TIE Fighters, or so far anything.   He can stand and look good - but right now, he's a rotten pilot.  Should he get a unique vehicle Hasbro will either need to redesign the figure or give the vehicle a wide seat. 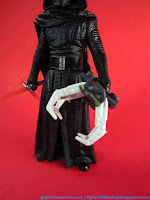 For some reason, Hasbro included a bonus "build" accessory.  The packaging, in Aurebesh, reads "Combine Jungle Weapons" below a call-out for fans to "combine" the accessories.  Kylo Ren's accessory is basically a big bear trap - it's kind of cool, a claw weapon he can hold.  It is articulated in two places, and can combine with Captain Phasma's buzzsaw weapon and Luke Skywalker's weirdo backpack.   The toy weirdo in me assumes I might grow to like these later - but when it's time for a new movie, I don't think I have the disposition to appreciate this.  The items aren't named, and the packaging has bland stick figures showing how to hold the weapon.  I'd assume these were developed separately and there may not have been a ton of conversation between those who developed these accessories and the figures, but what do I know?   I assume these will be junk drawer fodder and exist mostly to justify yet another price increase.   I've played with 4 of them as of my writing this review, and they range from pretty acceptable - like Phasma's saw and Kylo Ren's claw - to the confusing, like the TIE Pilot's claw chair seat thing. 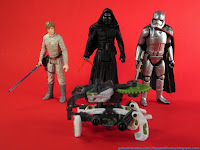 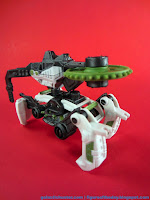 I don't know what this combined thing is.   The individual gizmos more or less function - but as a group it's just a mess.  The claw trap just gets in teh way - you can combine the backpack and the saw without it.  The word "afterthought" comes to mind - or perhaps this was, at one point, meant to be a construction system like Transformers' MechTech from 2011.  (That didn't seem to really work out either.)   As a combined contraption, the grips on the saw are out of reach of any figure.  It's not particularly tall, nor is it really cohesive in any meaningful way outside of the coloring.  You can plug these in the other weapons too - and the fact that they're unbranded and nameless makes me assume we're going to sweep these under the rug in time for Rogue One.   At least if Hasbro gave it a snappy name, maybe kids could talk about how much they like them.  I suppose with no name, collectors can't easily disparage them on message boards.   Perhaps the latter reason is why they're nameless - fans have a long memory and dubiously clever knocks can stick around for years.   At least CommTech got us some stands and our first taste of RFID technologies. 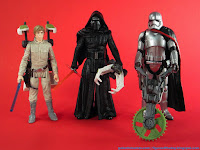 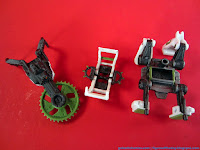 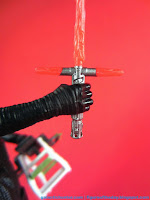 I am sure much more will be written about these things and I wish it did more.  Perhaps if they were snap-on accessories to enhance the vehicles, or things that were a tiny bit more fun to play with.   Having said that, get this figure if you can.  Kylo Ren is neat, and another version is being sold with weird snap-on armor - but lacks the hooded head of this release.   I don't know how he'll shake out on the big screen, but for the time being I think I prefer this one.   If you're looking for a souvenir  or a desk toy, this is certainly decent and sturdy and stable.   It doesn't have jointed elbows or cloth robes, but it might be a while before we see a lot more of that in this size class.   There's a big Jakks Pacific one and Funko has a few too - so shop around.   You've got options.

Collector's Notes: I got mine from Entertainment Earth.   You probably got yours a few hours ago instead of sleeping.

I picked this up at Walmart last night as part of their Farce Friday event. It was one of the few things they actually had in stock. Total of everything that was out was three cases of the speederbike/walker vehicles, four cases of 3.75" figures, a few cases of 6" figures (didn't count, $20 per figure is out of my range and I'm not a fan of the 6" scale), about 3 dozen titanium ships, and a handful of micro machine packs. The only thing that seemed to make it off the truck in time was the bladebuilder lightsabers and the Lego line. They let us actually grab stuff off the displays at midnight, I was checked out and on the road by 12:15 and in bed by 12:30. I had actually gone in search of the new X-Wing and TIE but those will be delivered by Amazon in a couple of days.

Now that I'm done complaining, the figures look pretty good. I haven't gotten to open the three I purchased yet but they look much better than the last few rounds of 5PoA figures. I'm hoping they give us a few super-articulated versions as well.

The build-a-weapon accessories make no sense to me. They'll be in the junk drawer before the packaging makes it to the trash can.