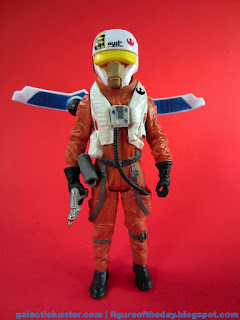 Bio: Ello Atsy is a skilled if occasionally reckless X-Wing Starfighter pilot for the Resistance.   (Taken from the figure's packaging.) 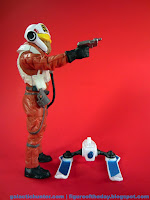 Commentary:  When I first saw X-Wing Pilot Atsy I thought we were looking at our first head swap. It looks like Poe Dameron, but it turns out it isn't the same body at all.   They seem cut from the same cloth - quite literally - but all the straps, pouches, hoses, and other bits hang on each body differently.  Both are orange pilots with opaque visors and Resistance (Rebel?) symbols, plus they actually match.  This may not sound like high praise, but Hasbro hasn't found an orange it likes for Rebel Pilots so seeing two consecutive Resistance flyers feels like a good sign.  I'm sure it doesn't hurt they were manufactured at about the same time, either.  They both share similar articulation with 5 joints each, plus a working holster.  The blaster fits perfectly. 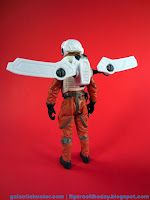 I've tested him in a few vehicles - after all, the best sculpting and deco don't mean jack if your pilot can't fit in a vehicle.  I don't have my X-Wing from the new movie yet, but I struggled to get him in a Snowspeeder while he was just fine in a Y-Wing.  So maybe he's good, maybe he's not.   He has great helmet markings featuring a Rebel sumbol, a black and yellow graphic, and some writing I don't recognize in addition to little buttons and switches on his chest console.  Most of the straps are decorated, meaning you have something that's pretty good as a figure if not as a working toy pilot.  The sculpting is just fine, mostly because there's nowhere to go wrong here.  Once you get in the flight suit and cover most of the face, it would take some serious doing to make a figure that, in and of its own merits, looks bad.  We won't know if it's off-model for a while still. 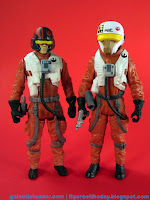 The "Combine!" accessory is the ski feet of the build-a-droid, but also a winged backpack.   "Let's pretend" is a common part of toy play with kids - who among us didn't turn R2-D2 or R5-D4 into a makeshift cannon? - but as adult collectors it's hard to deny we're looking at robot feet on his back.  It's whimsical, I suppose.  If kids had any chance of finding these figures right now it may even be a sharp idea.   As it is, though, I just grab them and assemble my robot and call it a day.

What's driving me nuts, though, is the packaging.  His helmet has aurebesh, and it says "Born to Ill."  Why? I don't know.  I'm seeing reference to a street artist named D*Face, so maybe it has something to do with that.  Otherwise, I don't get it.   As a new species and a new character, it's interesting.  WIth a helmet covering his head, it's a little less interesting.  I'm all for diversity, but a removable helmet would be nice just to see who this guy is.   I won't say this figure makes me feel awesome, but I'll take an alien pilot when I can.

It's a Beastie Boys reference. His name, Ello Asty, is a play on the Beasties 5th album title, Hello Nasty. The hit "Intergalactic" came from it. License to Ill was their 1st album. Apparently JJ Abrams is a big fan.
Thanks goes to Yakface for the tip off

It's also a full metal jacket reference. The main character had "born to kill" painted on his helmet.

I love the little 'Easter Egg' here and wouldn't be surprised if it came from JJ himself. After all, he did use the Beasties' mighty 'Sabotage' in Trek, when young Jimmy Kirk takes his stepdad's car for a little, uh, joyride...