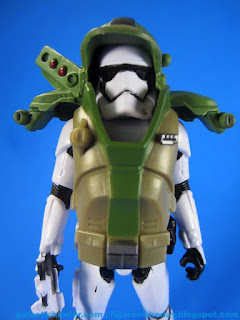 Bio: Equipped with sleek armor and powerful weapons, the stormtroopers enforce the will of the First Order. (Taken from the figure's packaging.  Yes, it's the same as the other Stormtrooper figures.  It's a great way to learn the language.) 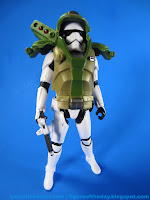 Commentary:  The Armor Up First Order Stormtrooper makes total sense if you're Hasbro and is the work of a madman if you don't.  The figure is, at its heart, not bad - given the scarce resources on the new film, Hasbro had to make something and knowing the affinity for army builders to buy multiple figures, offering multiple configurations just makes sense.  At the same time, the assortment is also extremely alienating to some collectors - or it would be, were there any unsold product.   Complain if you wish, but the important thing to remember is how Hasbro views a line like this one.  If you're dealing with supply shortages and product sells out in a multimillion (or maybe billion) dollar launch within the first weekend for toys in a consumer orgy of epic proportions, then they can go back to their bosses and say "yes, fans do want $12.99 figures with fundamentally no improvement over the $7.99 version."    Keep that in mind as we see Rogue One and Episode VIII stuff over the next 18 months. 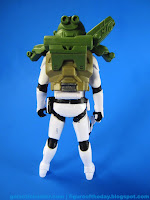 The Stormtrooper is good.  I can't argue with that.  The figure is really nice, and essentially the same thing as the $7.99 one except for the gun.  The blaster still plugs on his thigh, the figure is still jointed at the neck, shoulders, and hips.   If you're a "one of everything" collector, this sort of gimmick allows you to build an army without ever having to buy the same figure twice - from a certain point of view.  We also found out the $7.99 basic figure will also be repackaged, under a new SKU with a new UPC, if it hasn't already shown up in your neck of the woods.   It's an interesting gambit - how do you make multiple versions of a trooper when they are (as far as we know) all probably basically the same color once the Empire took over?  Well, new weapons, new armor.  The Hasbro designers are taking a page from Batman in 1990, when Kenner introduced the simultaneously garish and gorgeous The Dark Knight Collection with special suits and really fun gear.  (I was on the older edge of the target audience at that point - I bought many and loved them all.) 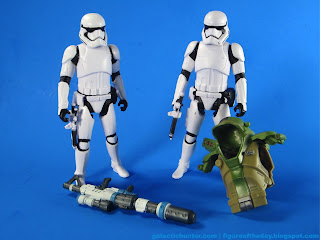 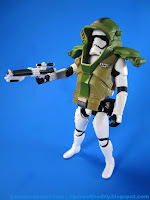 The paint on my sample was a little sloppier than the basic figure, but it's otherwise the same thing - same white plastic, same paint masks.  The figure quality is unchanged, but it's impossible for me to get beyond the price - it's not worth it.  It's better than paying some goober $25-$50 for the regular version on the secondary market, maybe, but perhaps waiting it out would also be wise.

The actual armor is pretty nifty and silly.  Much like buying a coat to keep over your coat, the armor to go over your armor seems... unusual.   The green gear clips over the figure easily, giving him a neck brace that really does little to let you move his head.  It's kind of funny - there's a series of rockets next to his head to encourage hearing loss, and a robo nipple as well as what appears to be a rank badge.   The whole ordeal looks like a next-generation mutation of Commander Cody's upgrades, which makes me smile.   The shoulder pads remind me of wings, but I have to assume this wasn't meant to be a rocket pack by virtue of the lack of any such thing on his back.  So, for all intents and purposes, the First Order's elite troopers are wearing decorative green neck braces with little lights on them.   It doesn't feel totally out of whack with what we've bought before, but it is a little... life preserver-ey.

My guess is a few years from now, this is the one that will be interesting to fans of the figure line.  There will be dozens of Stormtroopers that look like the movie, but precious few have alternate armor or special suits to enhance them.   This is, of course, finite - if Hasbro makes up dozens of new troopers, people will probably just as soon get sick of them.   (See also: Clone Troopers.)   I'd love to see what else Hasbro comes up with to augment figures, because coming up with a way of doing this while retaining the integrity of the core figure (and reusing the figure) is certainly a smart business move.