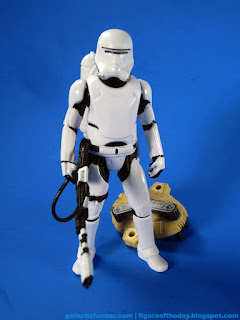 Bio: Specialized Stormtroopers of the First Order, Flametroopers carry mercenary weapons that can transform any battlefield into an infernal blaze. (Taken from the figure's packaging.) 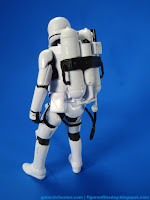 Commentary:  Supposedly the implements of a grand murder, the Flametrooper is a decent figure.  I won't say it's great, and I will say completists are destined to own at least three of them. There's this one, an "Armor Up" version, and a version in Amazon's First Order Legion action figure set.  As of now this one's only distinctive feature is a Combine Weapon shield which becomes a sort of a robot crab head and body.  If you don't like that piece, get any version - the figure is fundamentally the same.

This one immediately reminds me of Scorch and the Republic Commando figures - the broader base on the helmet, the eye strip, and even the body armor seem to take a cue from the game series designs.  It's just a lot blander.   Mostly white, the figure can hold the torch end of things with one hand while the other end plugs in to the removable backpack.   Hand #2 can hold a desert shield accessory.   The figure is all white plastic with some black markings, making it fairly simple.  The plastic is glossy and white with copyright and manufacturing markings nicely disguised.  Rather than branding in a date stamp or SKU, a subtle, small silver marking on the back of the left leg under the fanny seems to work out nicely.  Other markings are on the sole of the boot.  There aren't a lot of special markings here, meaning the regular Stormtrooper has a lot more going on than this simpler Flametrooper.  Without the "OII" on the back and other distinctive markings, I would assume Hasbro could have snuck this in to The Clone Wars as a new kind of clone and nobody would raise an eyebrow. 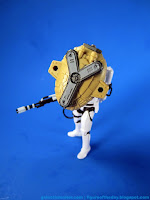 The "Combine!" accessory is a nifty shield he can hold in his hand - it's goofy, but nice.   The brown thing has silver and grey on it, plus it becomes the "shell" of a combined crab robot using axe hands and a tank for legs.   The arms move and the neck articulates, so it's a pretty solid little toy.  It's also silly, but I can live with it. 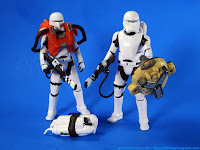 It's good.  I assume you'll buy one or more of it if you aren't sick of Clone Troopers by now.   It does feel a little more, uh, early 2000s than the rest of the class and it's not at all bad.   Having two fully-jointed arms would be nice to better aim the torch.  I'd also like better leg articulation because he's a little wobbbly, but that's life.  The torch plugs in the backpack nicely, the backpack plugs in the back, and the whole thing basically works - but balance is a bit tricky.   It's not quite as stable as the rest, but a little fidgeting and he's going to stay upright on your desk.   Get one of them - you've got options - because it's pretty good.