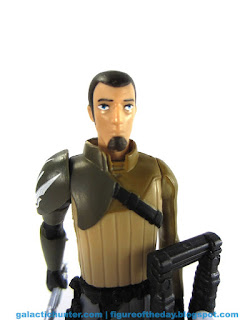 Bio: A Jedi Padawan who survived the destruction of the Jedi Order, Kanan kept his past a secret until he joined a group of Rebels dedicated to resisting the Empire. (Taken from the figure's packaging.) 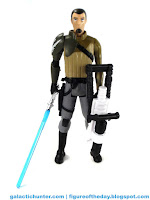 Commentary:  Packed in most waves of Rebels figures, this same Kanan Jarrus action figure is likely something you already own.   If you're a completist, it's unavoidable that you might have several - there's a single-carded one, a Mission Series one with Cadet Ezra, a Target Exclusive version of the Phantom that came with this figure, and a Toys R Us figure set with Ezra, Holographic Obi-Wan Kenobi, and - you guessed it - Kanan.  Kanan was also packed 2 per box in multiple assortments, whereas Chopper and others quickly vanished and are no longer cheap.   If you're attempting to collect all the figures and accessories, by now, you'll probably have at least 3 Kanan figures - 4 if you count the one with the remolded head from the new Y-Wing Scout Bomber.   If you want to know how this figure looks, here's the review from before - it's the same basic thing.  5 joints, good paint, stands and sits, works well as a figure pilot.  If you don't have this figure, it's one you should get - but only go after this specific version if you're an accessory completist. 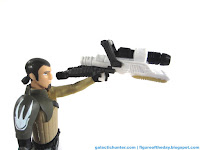 The figure's  "Combine!" accessory is a blaster that looks more than a little bit like the guns from Portal.  It has two black handles that don't rotate, but you can pluck them off as they clip on with square pegs.  Due to the shape of Kanan's wrists and hands, he has trouble aiming the gun straight ahead - he needs to basically hold it above his head to shoot it.  It's silly.   If a figure had more articulation it may better be able to use this accessory, but as it is it's kind of awkward and weird.   I don't think this figure benefits from this accessory - he can carry it, but he can't really use it.

If you don't yet have a Kanan this is as good as any.  I'd push you to the Y-Wing Scout Bomber version so you can get that vehicle - that alone is worth it.  This one is OK if you want/need the gun.  Otherwise?  Save some money.