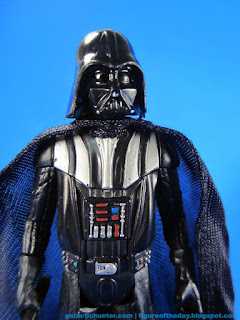 Bio: Destined to bring balance to the Force, Anakin Skywalker fell to the Dark Side and arose as Darth Vader. (Taken from the figure's packaging.  It means nothing.) 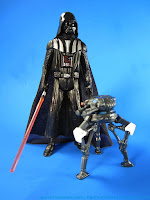 Commentary:  Along with death and taxes, Darth Vader is a certainty.   Hasbro has realized that he's essential to Star Wars, dead or not.  The good news for you is if you have a kid who wants one, the wish will be granted.  The bad news for you is you've got this mold, and the deco is barely different.  This is the Saga Legends/Mission Series mold which has been used 3 times now, and I see no significant new changes to the sculpt - the main change is his silver chest armor is a bit more bright and, uh, silvery.  It's shiny and new, which is nice.  The buttons and switches are largely the same, and the plastic isn't significantly different.   He still has 5 joints and you probably own 2-3 of this figure already.  Variant hounds, if you're picky, this is a buy.  The lightsaber is nothing new, but his companion figure is actually compelling. 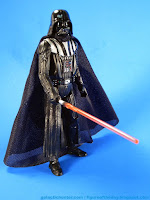 The "Combine!" accessory is a figure rather than a backpack or weapon - it's a little droid buddy.  This one actually looks and feels Star Wars-y, except that he's had some changes.  There are white knees, there are two huge guns on his head, and he's a little guy.  The grey plastic looks nice, and the blue and red highlights give him 3 more colors than I'd expect on a sidekick accessory.  Unlike the various other gear, this one has elements that were lifted from the films - it feels like a Probe Droid, even though it's clearly off-model.  This one trades on the designs you love and delivers something new and cheap.  I dig it.  The head rotates, and each of the legs wiggles a tiny bit to help with stability.  It's not bad.  The combined mode is pretty silly -  you add a giant gun hat to the robot, making it a tripod laser cannon.   Inelegant, but goofy and fun.  I like it.  It's better than the jungle nonsense.   This one makes some degree of sense, and I think that helps a bunch.

This figure is by zero means essential.  You probably have a Darth Vader.  Or two.  Or fifty.   You've got other, better things you can buy now - but that little droid is cool, and is easily worth the asking price on sale somewhere.   If you can get it cheap, or it's part of  set or a lot that's otherwise a good deal, pick up this one with a smile.  It's good!  The Vader stands and sits and holds his lightsaber, and the little probe droid is something I'd actually pay three bucks to get.