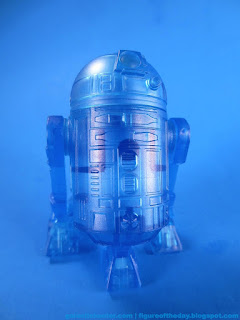 Bio: Whether he is delivering a secret message to Obi-Wan Kenobi or saving the classic heroes of the Rebel Alliance from the trash compactor on the Death Star, R2-D2 is always ready for any mission.   For the first time, R2-D2 is portrayed as his own holographic transmission action figure.  What secret information does R2 carry this time?  Join R2-D2 on his adventure throughout the galaxy! (Taken from the figure's packaging.) 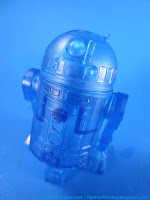 Commentary:  Clear blue figures (and before them, clear purple figures) have been part of this line for just over 15 years.   Holographic R2-D2 is the first-ever droid to get the unpainted distinction, this time taking the 2015 version of the build-a-droid mold with clear blue plastic.  When lit from behind, the figure looks great - almost like blueprints come to life.  THe toy itself is sort of silly, because I can't remember a single instance of the droid appearing as a blue light image in the movies.  Maybe he was in the cartoons, I certainly can't remember off the top of my head.  It didn't make an impact, but as the black repaint is to Transformers so is the clear blue repaint to Star Wars. 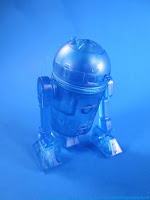 As a clear blue repaint, it highlights some of the things that work (and don't work) about the sculpt.  For example, the little dot under the eye and next to the holographic projector has been painted, rather than molded, on most R2 Astromech domes for some time.  As this figure is unpainted, this facial feature is now oddly absent.   Without paint, it's easy to notice the frosty texture on all the parts rather than a clear, smooth finish.  It works nicely.  It also lets you see the inner-workings of the figure, which is something you usually don't see unless you crack one open along the seam.

If you've always wanted a clear R2-D2, today's the day - go get one.   It's pricey, but unfortunately that tends to happen with event figures until people get sick of them and prices drop - which we saw happened with a lot of the silver figures from 2002-2005.   I don't know what the future holds for this one, but if you can get it cheap it's neat enough to be worthwhile.

Collector's Notes: I got this from eBay. It was a Star Wars Weekends Orlando item.  $20 shipped - admittedly not cheap, but if you don't feel like paying to park at a Disney thing it's a pretty decent price.