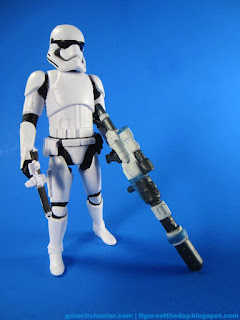 Bio: Equipped with sleek armor and powerful weapons, the stormtroopers enforce the will of the First Order. (Taken from the figure's packaging.  The bios are getting a little too silly trying to hide spoilers now, aren't they?) 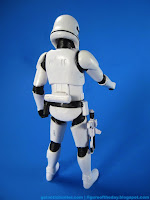 Commentary:  I was surprised to find out that the First Order Stormtrooper figures weren't all the same color.  Phasma is silver, there's a black one with a speeder bike, but even more surprisingly the white of this figure doesn't match the white of the Assault Walker's pack-in Stormtrooper Sergeant.  That one is more yellow, more glossy, and feels like it lost some detail.  It may be my imagination, but it also seems a tiny bit taller - and for some reason, it can't stand.   So the single-carded one is the clear winner here.  Also, this figure's giant "Combine!" weapon is actually decent and it seems to fit the look and feel of the line.  It's like we're in crazy town here, everything about this one is good. 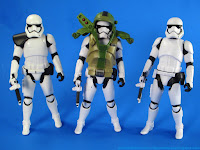 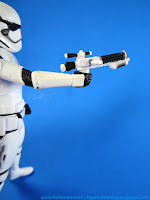 Other than the fact that it can't sit - which is starting to bother me, it's not like they didn't have time to tweak the hips - this is a nice figure.   Sure, he won't pilot any vehicles he can't stand in, but at least he has a nice texture on his white plastic armor.  The familiar trooper look is present, with black marks on the face and armored legs that seem more inspired by Clone Troopers, but it's neat.  It's good.  It's got "OII" on the back, and the figure has a slightly different look and feel from the pack-in troopers.   As accessories go, he has a cool blaster pistol, just like the 6-inch Stormtrooper.  It plugs in his hip, and thus the problem of dangling holsters preventing a figure from sitting has been solved.  Well, almost - the hips don't allow him to sit properly.   Unless the seats are leaning back, there's no way for him to pilot your TIE Fighters or other craft.

His sculpt is good, and the white plastic they used for him seems vibrant and whiter-than-white.  It's whiter than the walker driver, after all, and that's a pretty awesome thing - the plastic seems very similar to Disney's astromech droid figures, too. 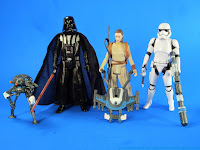 The "Combine!" accessory is a really big blaster - kind of like the 1990s Kenner ones, bit bigger and more garish with white and blue deco on it.   It looks sort of like a cross between the regular new Stormtrooper blaster and a Nerf gun.  It's a little on the large side, so getting the trooper to carry it and not fall over will require patience or a display stand.   Or both. 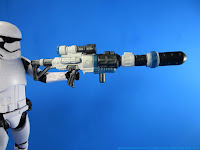 Maybe it's just because I dislike the other ones so much, but this one actually seems to work for me.  Not only does it look like a gun, but you know what it's for without having to consult a leaflet.  There's no question as to why it's here and what it can do - well, except for a little connection peg which also allows you to position it in a Disney Build-A-Droid dome for funsies.   It almost feels like Hasbro just scaled down a Nerf concept to action figure size, and I really dig that.  Kudos for making something that doesn't challenge my sense of what makes a good toy accessory.  It's silly, but it feels more in line with the figures - especially thanks to the redesigned "modern" Stormtrooper blaster - than anything else we've seen so far. 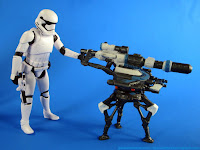 You should buy this.  You have no reason to not buy this.   It's a cool new design that looks like something Worlds of Wonder may have cranked out for Lazer Tag in 1987 or so.   I find the lack of ability to sit in vehicles off-putting, but as much as I hate to say it dangling holsters and similarly poorly designed hip joints have been causing this problem for years.  Hopefully Hasbro fill fix it for Rogue One and whatever troopers we get for that.  With just 5 joints, it's more important than ever that those moving parts function properly.  I assume it might get better with time - maybe we'll see improvements in a new revision - hopefully for Episode VIII.  I know everything can't always be perfect, but if Hasbro is going to drop elbows and wrists, at the very least I'd like the hips to work well enough to justify their inclusion.   If an action figure can't stand, sit, hold his weapons, and sit in a vehicle we may as well collect PVC figures or statues.