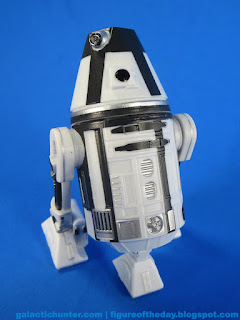 Commentary:  This is the third figure to bear the name R4-M9.  The first one had nearly identical deco on a different mold back in 2002, it was slightly greener and also had a silver box around his central eye.  The silver box does not seem to be present in most photography of the movie droid from the original Star Wars, which raises another question - why does the box boast it's from The Force Awakens when it's identical to the Star Wars droid?  Is he in both?  Is the box wrong?  For the time being I'm going to say both - we'll find out if I'm wrong, maybe, in December.  Or when we see the deleted scenes. 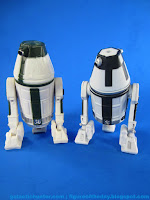 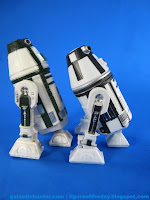 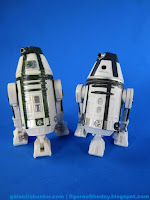 The mold is the same as the 2015 R4 Disney mold - you know the drill.  There's a hole in the head for a hat (not included) and you can pop apart the figure at the head, shoulders, and the central third leg pops out.   It seems to match the original Star Wars swimmingly, with the stripes thicker, seemingly more accurately colored, and angled better than the original.   It's always weird to be made to give a figure a second look after 13 years, but now we see Hasbro made a nice droid in 2002 but it wasn't quite perfect.  Just as interesting is the back of the new R4's dome - the stripe pattern is significantly different, with big grey stripes and little white boxes around the top.  The body deco is pretty much identical.   If you're looking to upgrade or flesh out a Tantive IV diorama, this is a good upgrade. 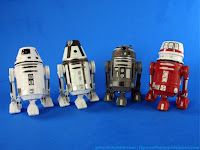 I have no idea if it's really in the new movie - I'm assuming it's not.  As it's a more authentic version of an existing movie toy, I'm all for it and you should probably give this one a thought or two as a "best ever figure" for the droid.  Sure, it's missing the foot wires, but that's Disney for you - and the 2002 one didn't have real wires there either.   Snag this one if you can - the set is worth the $30 and rumor has it the price might be going up soon.  With the unpainted eye it looks different from the previous version, which means you not only get a rockin' authenticity upgrade but you get another "new" droid for your dioramas if you need them.  It's different enough to make you happy.  How often does that happen? 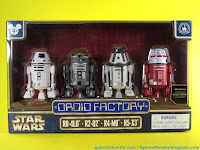 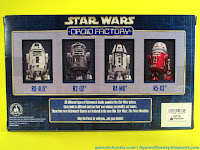 If you're passing through the Orlando airport, the four packs are available in the Disney store there for the same price.