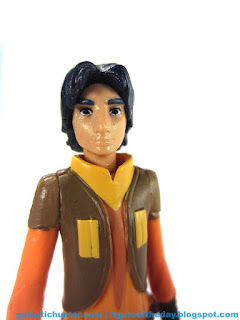 Bio: An orphan and con artist on the planet Lothal, Ezra was unaware of his connection to the Force until he encountered Kanan Jarrus and learned the truth about his powers. (Taken from the figure's packaging.) 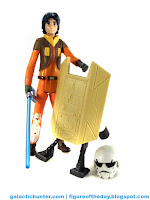 Commentary:  I don't always like surprises - when I saw Ezra Bridger was getting yet another run, I wasn't so thrilled.  Hasbro didn't announce much to us, so really all we have to go on are blurry cell phone photos and reports from non-reporters - so at first glance, it looked like all we were getting was the single-carded figure again with a new build weapon.  The good news is that this was only partially right - Hasbro opted to pack in his unique staple-gun lightsaber, which (from where I sit) drives the purchase and makes this the currently definitive take on the character as an action figure. 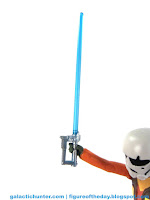 This figure is the same one from last year with a notable change... depending on when you bought your first version.  The artwork on the back of his vest is the "revised" version - the first one had a fuzzier tampo design - with everything else more or less staying put.  He still seems colored similarly to Liz Taylor, he still has the cosmic Punky Brewster pants going on, and he still has the wrist communicator on his left hand - if you missed the individually carded version of Ezra, this is pretty much the exact same thing.  He's even got the AT-DP/Cadet helmet, so if you're a completist you'll want this one, and the one in the Toys R Us "Mystery" three-pack with Obi-Wan Kenobi (Holographic) and Kanan.   Unless you can live without Obi-Wan, in which case, just get this one. 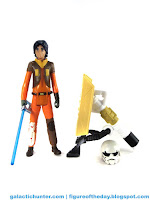 The selling point that will make this figure desirable down the road (pending reissues and threeissues) is his lightsaber.  Previous releases omitted the Jedi weapon, which was more or less consistent with the line - most figures got 1 or 0 accessories, so Ezra got a helmet and nothing else.  No slingshot, no lightsaber.  It felt incomplete, but now with the weapon he seems totally fine.  It fits in his hand perfectly and comes with a painted silver hilt.   If - big if - there's a long-term kid audience for this line, when they get older and decide to collect, this is the one they'll probably want to get.  If 3 3/4-inch action figures are still a thing - and I assume they will be.   I know it's dumb to suggest you buy a figure for one specific and small accessory, but here we are.

The "Combine!" accessory is about as worthless as the rest - you get a three-part shield/mortar/kickstand thing.  It stands next to your figure and doesn't resemble anything you've seen in the saga, other than perhaps a TIE Advanced wing on a tripod.  You can plug other weapons into it, and it is dull.   It's a good thing this figure had the lightsaber from the show, because otherwise this would be pretty pointless. 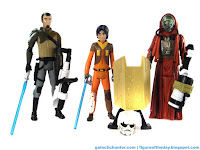 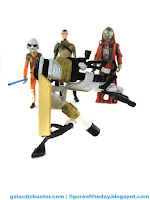 If you're a fan of The Clone Wars you may know that figures from that show are either very cheap or very expensive - there's little middle ground.  Unique accessories that create an obvious divide between "the good version" and "the bad version" can make a big difference - and it's possible fans, tourists, and speculators will just buy this figure not knowing he's a reissue.   You know better - this is a figure you're buying solely for the accessories if you're otherwise caught up.  Since he can stand, sit, wear his helmet, and fit in vehicles, he's a good one.   It wouldn't surprise me if he pegwarms after he hits widely, but even if he does - please - if you're a fan of the show, just get him early.   I can't imagine Rebels is going to balloon up into something huge after the movie, so get while the getting is good.