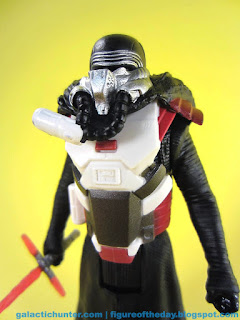 Bio: A dark warrior strong with the Force, Kylo Ren commands First Order missions with a temper as fiery as his unconventional lightsaber. (Taken from the figure's packaging.  Yes, it's the same as the basic one.) 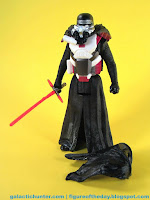 Commentary:  Having limited visibility of the new figures prior to launch, I did not realize that the Armor Up flavor of Kylo Ren was not the same sculpt as the "Jungle Claw" version.   So for those keeping track, that means at least four 3 3/4-inch toys of Kylo Ren are known to be coming.  The really amazing thing about the Armor Up figures is that they come boxed and with a $5 mark-up, meaning that they're really only a good value in the sense that it's cheaper than paying $50 for the other version on eBay.  So to keep things straight, Hasbro is charging $8 for basic figures, $13 for Armor Up figures, and $15 for 2-packs.  The Armor Up figures are, without a doubt, the worst deal of the year. 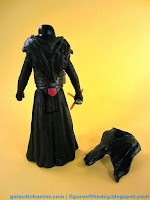 Given most of the Armor Up figures in wave one are straight-up repacks, I would advise you to skip them in most cases - but it turns out Kylo Ren is actually significantly different.  His head, cape, legs, and left arm are different sculpts.  You'll notice his hood is off of his helmet and added, folded down, on his cape.  His left arm is now a clenched fist.  The legs are remolded to have the robes and shoes in slightly different positions.  Also, snow deco has been added to the feet and lower robes - it's actually pretty subtle, especially compared to how they did it with Finn.   It's really amazing that Hasbro even bothered - I can't help but wonder if there was a clerical error, and this new sculpt was meant for the second individually carded basic Kylo Ren.  Just changing out the "Combine Weapon" seems kind of weak, but a new body? OK, I could see that. 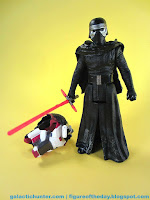 The added snow deco on the legs is nice, and - unsurprisingly - you can swap heads and capes between the figures since they share a common torso.   This is the kind of thing I think we'd all like to see more of in these lines, because it isn't all that hard and it gives us a ton of options - as well as reasons to buy more of some figures.  If I could swap out Stormtrooper arms to get different poses, you know I'd buy extras.   Without the extra armor bib, the figure looks nice - it's not as cool as the hooded Kylo Ren, but you do get a look at the full helmet and I love that.  The fist changes up his personality - which is tough with a mask - so kudos to Hasbro for putting in a few bucks to make this one a little different. 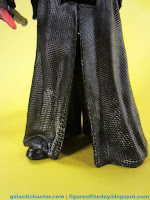 Now, the Armor Up extra accessory is sort of a mixed bag.  In theory, this is something I've been itching to see for a while - but a small piece of armor does not a $13 figure make.   It incorporates elements of his cape, bits of what looks like Stormtrooper gear, and some sort of SCUBA thing.   I think it can go without saying that none of this nonsense is in the movie, and while the sculpting is good it is something of a bad fit. That's true of many of these - great idea, but a bad price and a worse execution.  The box is mostly empty space, but I have little doubt someone will be tricked by the nice big art on the box and not realize that there's not a lot of toy here for the money.  Extra guns or the Combine Weapon parts would add to it, but this isn't exactly comparable to other Hasbro products near the price point.  Granted, if you want a Kylo Ren that looks like he can go swimming after dropping a powdered sugar donut on his feet, there's really no other suitable replacement for this figure. 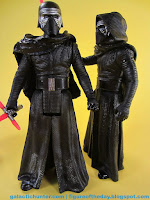 Nobody will claim this is a good deal.  It's an acceptable - if terribly priced - substitute for the cheap figures, no doubt existing to snooker in gift-givers or to take advantage of the fact that for new movie characters, sometimes supply and demand don't mesh.  Why let the secondary market get all the money when you, the manufacturer, can make a "premium" product?  Every figure in this assortment is one-per-case, which strikes me as genius for launch but short-sighted when people decide they just want the main bad guys later.   It's different enough to be worthwhile, though, so you may as well go ahead and get Armor Up Kylo Ren.  A new head sculpt, new legs, and a new arm are certainly different enough to justify buying - but maybe not at full price.