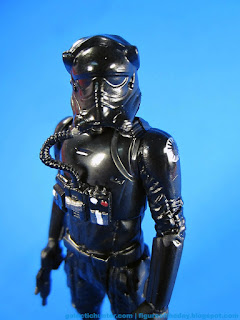 Bio: The skilled pilots of the First Order launch into combat aboard advancd fighter craft, hunting down enemy vessels and protecting space around installations and warships. (Taken from the figure's packaging.) 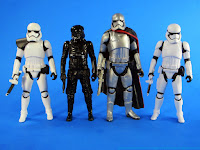 Commentary:  Because he's a trooper, you'll probably get more than one First Order TIE Fighter Pilot before this year is out - and that's a good thing, it's a nice one.   It borrows a bit from actual pilot suits, the original (and new) Stormtrooper armor, and it's black.  Oh - and he can actually sit down and pilot your old TIE Fighters, too. 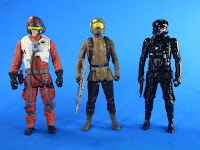 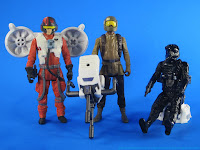 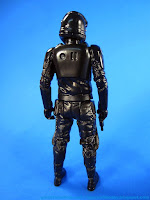 Having not seen the movie, I can only assume this is accurate-ish.  The helmet is a little on the smaller side, but other than that it's a good looking figure.  Like the Stormtrooper, it feels like a futuristic TIE Fighter Pilot - heck, it has a First Order symbol on his shoulder and a glossy helmet, that's a good start.  The "OII" design from the original Stormtroopers was kept for Phasma and the Pilot too, plus we've got a new black flight suit that looks a lot more like what I see in museums and G.I. Joe figures.   I don't want to say it's "realistic" - it's not - but it seems that the TIE Pilot was removed from the realm of space fantasy a little bit with this release.  It becomes the figure nicely.  There are hoses on the legs, and you'll note a ton of buttons on the chest in colors that feel a lot like the classic pilots, only remixed.   Heck, a lot of this line feels that way - everything you loved from 30 years ago, just different enough to feel fresh or modestly modern.   It's very black, and very nice.   A hose on the helmet connects to the chest, and it does not seem easy to remove - I assume kids will break this over time.  It looks cool, though, and it connects to a little nozzle on the chin of the helmet.  The design feels more refined. 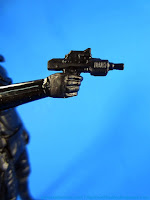 As accessories go, he has one you won't chuck into a drawer somewhere.  A new, small blaster pistol fits in his hand nicely and doesn't really look all that much like anything I've seen before.  He holds it well, you'll like it. 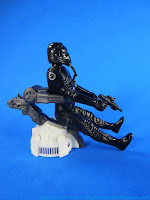 The "Combine!" accessory is a chair.  Sort of.   It's a claw which serves as sort of a seat belt, so the pilot can sit on it and not fall off.  But what is it?  It's not really a chair - it's angled strangely.  It's not quite a torture device or a form of restraint.  It doesn't seem to be an ejector seat.  It's white and grey, with some purple markings.  It combines with two other weapons to make another thing.  I don't get it.  I hope Hasbro uses its potentially already abandoned Pulse platform to show off and explain these things.   I feel that there must be some story behind this stuff - there was no room for it on the packaging, so I'm just left with weird gear. 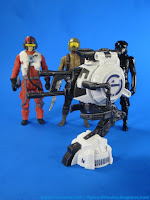 The claw arm has a hole on top to connect to gizmos from the Resistance Trooper and Poe Dameron, or others - they're pretty much all compatible.   AThe key difference here in "Space," as opposed to "Jungle," is that the thing looks like a cohesive whole.  There are tabs and slots on the other pieces that are clearly designed to fit with one another exclusively, and the end result is a mini cannon that looks like it could have come out of a mid-1980s Kenner sketchbook.  Although as guns go, it is a little goofy.  I know "tolerable" isn't high praise, but this is a far better execution of the concept than the jungle... thing. 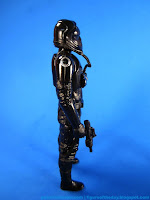 I have zero reason to not recommend the figure to you, although the itch may be scratched by the pilot that comes with the actual First Order TIE Fighter. That one has a removable helmet! This one has a goofy chair accessory that is so odd, I don't think I can advise you to buy it for just that.  Well, maybe I can, I'm kind of a jerk.  If you're an army builder still (are you people out there anymore?) this is a solid one.  Nice details, fun blaster.   It's OK for the price.

If you check out the legs of the flightsuit, there are 'quilted' vertical stripes - very reminiscent of Vader's suit. Nice touch!