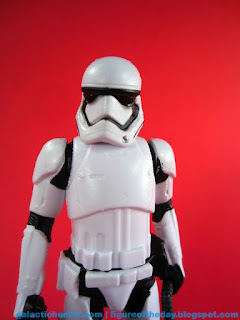 Bio: Equipped with sleek armor and powerful weapons, the stormtroopers enforce the will of the First Order. (Taken from the figure's packaging.) 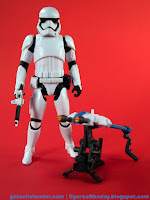 Commentary:  The term "just different enough to make you mad" qualifies with a few figures in this line, and the First Order Stormtrooper fits the bill.   The figure itself is virtually identical to the other carded version but mine - and this might be a one-off - has a super loose head. You can spin it around like in a cartoon - it could just be a fluke on my sample, but I haven't exactly opened a bunch of these yet.   The deco and plastic is, otherwise, pretty much the same.  The head isn't loose to the point of falling off, but the spinning action is certainly notable. 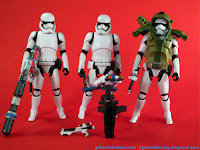 The "Combine!" accessory is what makes this one distinctive.  It is made of several moving parts - the grips move, the blue yoke spins, and the kickstand moves too.  Basically, it's a little bipod gun for your troops - it's nice.  The other trooper has a gun that's huge and lovely, so either one is arguably just as worthwhile to buy.   It's definitely an argument to army-build, which right now you're likely going to do by default.   Two basic Stormtroopers, an Armor Up, and a few in an Amazon set will net you at least 6 so far.  6 was always my target number for troopers - that fills out a vintage Imperial Troop Transporter, and more than that without a big playset or giant vehicle seems pretty pointless.  But I digress - the little weapon is white and blue with some red and grey accents.  It's small, and roughly at the same height as his junk.  So that's funny. 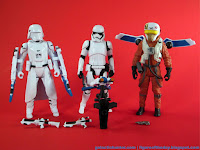 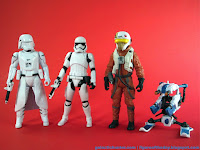 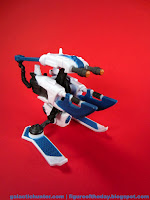 The combined mode is a little attack droid - it's great!  It's goofy, but I love it. Ski feet, knife arms, and two red eyes on little stalks gives you a robot that looks stretched out.   It doesn't look explicitly Star Wars-y due to to its coloring, but it doesn't feel totally mismatched from the universe either.    There's a hip joint, and you can rotate the knife arms.  Other than that, he just stands there and looks neat.   Maybe he'd be more at home in a Rebels shelf, but having seen so little of the new movie footage so far he could just as easily be trying to stab BB-8 at some billionaire's lodge in the Swiss Alps before a series of hot assassins come out to attack him.   But again, I digress. 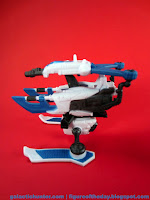 I like this one - if you can find it, it's good enough to drop the cash.   Interaction with accessories is perfectly good, and because it's an army builder I'd suggest buying both this and the other version if you think you want more than one of him.   It's not bad.  It's not great either, but it's fun enough to be worthwhile and it makes me glad I got something different even though I'm effectively army building.  This is a good idea - as long as Hasbro makes enough so we can find them, I'd like to see more same trooper/new gear set-ups like this.