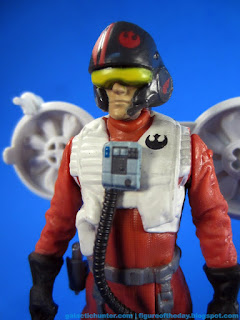 Bio: An ace pilot, Poe Dameron is a leader in the Resistance's fight against the First Order.  He soars into battle behind the controls of a modern X-Wing Fighter. (Taken from the figure's packaging.  It means nothing.) 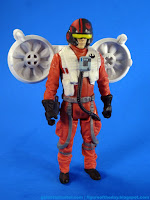 Commentary:  Hey, a pilot!  One of at least a couple, Poe Dameron has a dark orange - or orangey red - flight suit.  It looks close to the press photos and it's worth noting he actually has a working holster.  However, it's small and easily pops off.  If you got The Black Series Mara Jade, it's better than that - but you'll still want to be aware of this as it could fall into a vehicle as you play with the figure.  Poe has no problems standing, sitting, wearing his backpack, holding a gun, or piloting any of the many vehicles I've tried so far. 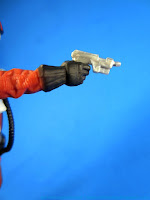 Non-removable helmets are kind of an antiquated thing - most figures don't have molded-on buckets like this one.   The 2005 Clone Pilot, and the vintage 1970s and 1980s pilots come to mind - oh, and the ones in the 1995-1998 range.  This is a bit of a throwback, and is one of very few "Rebel" pilots with an opaque visor.   You really don't get a good look at the likeness of actor Oscar Isaac here, but it's worth noting his head is removable.  You might be able to swap it with the version in the jacket - at this time I haven't had a chance to try it.   The look of the figure is, like the new TIE Pilot, more similar to real-world flight suits in places.  (And maybe not in others.)   The trademark hoses and vests are here, as are even more prominent symbols of Rebellion.  Or The Resistance.  Or both - we really don't know how the graphic designers in a galaxy far, far away do things.  Maybe Leia has something to do with it.  We'll find out. The small blaster is nice, but as of yet I can't say how accurate it is - really, reviewing these things before the movie is a tremendous waste of your time for a variety of reasons.  Not the least of which is I assume many of you have already made the purchase and are wasting time at lunch during work to see if people agree with your assessment of these new toys. 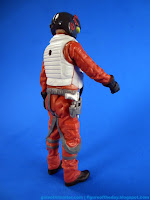 Rounding out the set is another decent "Combine Weapon" which is basically a backpack with fans that aren't fans.  It plugs into his back nicely, and if you want to pretend Poe has a backpack it's pretty acceptable.  It's not really remotely convincing - but hey, if you were a kid who used R2-D2 as a makeshift cannon in the 1980s, this isn't much of a stretch.  The detailing and sculpting is perfectly nice, but I don't really know what to make of it.  It feels like a distant, less fun cousin of the old Mini-Rigs. 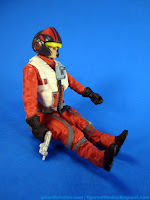 I like this one.  It feels like more of a mutant B-Wing Pilot but I'm sure I'll get used to him as the next generation of X-Wing Pilot.  Along with Rey, it's one of the line's early highlights - although the opaque visor does take some getting used to.  Also, the likeness isn't exactly striking - much like the 1979 X-Wing Luke, you could probably have just called it "Resistance Pilot" and gotten a pretty great reaction.  Having said that, this may not be an essential purchase - after all, you can get a pilot Poe with the new X-Wing.   If you're a variation and accessory completist you simply must buy this one.  If not... well, it's your money.  It's a good figure, but you may not need extras.