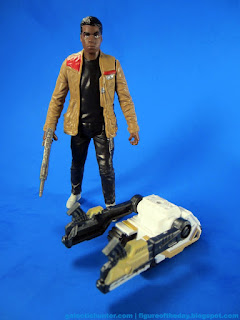 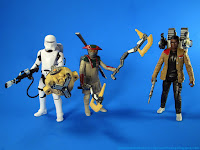 Commentary:  Still having no last name, I have to assume Finn's name either didn't clear legal by the time the toys were made or we're going to find out it's actually "Skywalker."  Or "Fett."   Figures like this make me happy because now I can say I've got a toy of the lead of Attack the Block.  Toys like this also make me upset because, at first, I had assumed Hasbro's 5-jointed strategy shorted me a quality toy - the hips won't let him sit at a 90-degree angle.   I was all set to complain and then I took him back to my vehicle stash, and tried him in the A-Wing - he fits.  Also the Y-Wing, and the Endor Forest Ranger.  But not a classic TIE Fighter.   Finn even fits in the 1995 Kenner Landspeeder, passing The Landspeeder Test - my arbitrary definition of how to determine a good 3 3/4-inch action figure is "can it fit in a Landspeeder?"  If yes, then I am generally pleased with it. 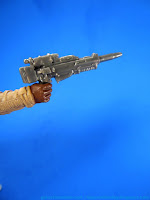 He can't sit super-well - for a figure that could well be the hero character of the line, this troubles me - but he's OK otherwise.  The sculpt looks like John Boyega - they got the chin right.   The costume matches the wallpaper and various leaked (and released) images, and in many respects resembles Luke Skywalker's costume from the Yavin ceremony in the original picture.   The jacket is brown with red and silver markings, with black pants and a black shirt.  The shoes are grey, and I don't have a heck of a lot else to say about the costume.  Aside form the jacket, it looks like typical Earth stuff.

The blaster seems very large,  especially when compared to those in the Stormtroopers.  It's even a bit taller than Phasma's weapon.     It's unpainted and reminds me a lot of the guns you've seen on modern-era Ree-Yees figures.  Based on some artwork I've seen online, it looks like the actual prop is indeed this big, but more colorful and with a strap.   Such is the danger of budgets. 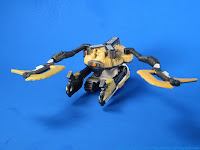 The "Combine!" accessory is a transforming piece - it's a bit better than some of the others.   It's a backpack with two guns that go on either side of the wearer's head, rendering them deaf by loud noises.   It can also become a little drone with guns, as you can see some treads on it too.   It's dumb, but it's functionally obvious what I should see in its design, minus one little quirk.  The hinge with the peg that plugs into a figure's back may not be immediately obvious, and almost feels like an afterthought on the design. 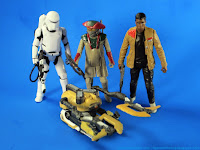 It's worth noting that Finn absolutely is a little short for a Stormtrooper.  As his identity is being kept secret on the merchandise, I have to assume it's either going to get very interesting or we're going to have to strap ourselves in for a number of red herrings as the saga continues.   As figures to this one is pretty good, but I can already hear people complaining that he doesn't have ankles or knees.  Nuts to that, I just want better hip joints - but I can't say I'd expect a better sculpt or deco at this size.   If you want a Finn, this is a good one.