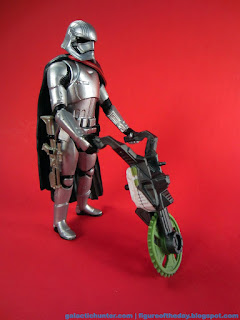 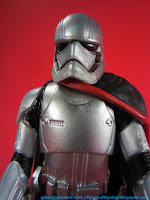 Commentary:  I assume this isn't a "spoiler" since it's in the press, but Captain Phasma is huge.  She's also a she - taller than Kylo Ren, a towering silver chromed warrior and... we don't know too much else.   We're in an era that seems interested in subverting and changing expectations as to gender roles, and I'm sure as a storytelling corporation Disney is going to make this interesting for us - particularly since women are largely ignored in Star Wars as characters.  Or even scenery, really - it's a boy's club.   With two women in the first wave, The Force Awakens has really done wonders.  Well, that's a half-truth - we had a few for the prequels, but often the same character in new outfits or background characters with few or no lines. 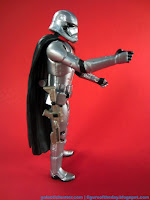 The figure is pretty good - by now you know it has 5 points of articulation, with swivel limbs and a ball-jointed neck which can easily pop off so you can remove her cape or, more likely, add some weird snap-on armor bib later.   The deco on this one is surprising - the torso and limbs aren't the same silver.  The torso is painted, the limbs and head appear to be silver swirly plastic.  Interestingly, the armor itself just seems to be a bigger Stormtrooper with different shoes.  You can see hints of "high heels" on her boots, but aside from that it's basically just a taller, silver Stormtrooper.   The original trilogy was weak in supplying a leader for the troops outside Darth Vader, and if the bio is any indicator this one will lead troops in at least one battle.  That's pretty interesting from where I sit, and it's consistent with The Clone Wars' toys. 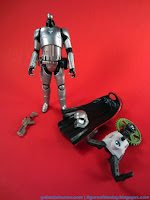 Detailing is rpretty good - not too rough, a few interesting details are worthy of mentioning.  She has added grooves over her eyes, and they seem not unlike those around Kylo Ren's eye opening.  Interesting!  Her helmet is missing a dongle on the chin of the regular trooper, plus her mouth helmet also has some added texture on it in the "beard" area on the sides of her face.  She also has two dents in her codpiece - this seems consistent with the costume in stills we've seen so far.   As the figure is not vac-metal silver, I suspect someone will be getting a variant of this or another mold sooner or later. 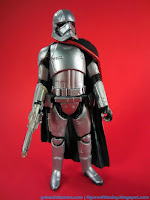 Her cape is rubbery, and her painted silver blaster has some black markings.  It pegs in to her thigh, but not without a fight - she has a big belt that sort of gets in the way.  As such, it's a wonky feature and could work better.   Due to the position of the blaster on her leg, her arm can be posed like it's about to grab the grip and remove it - this, I appreciate.  If the figure stopped here she'd be pretty good, as the arms swivel nicely until they hit the cape.  The legs swing forward, but not the full 90 degrees - so getting her in vehicles may prove difficult, even if her size weren't an issue.   I expect more versions of her are coming, and this one is not unlike the wonderful 2002 "Sneak Preview" Jango Fett.  It looks good, it doesn't cost too much, and it stands on your desk without looking dorky.  As long as you keep her combining weapon away. 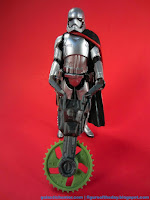 The nameless weapon is a metal detector with a green blade on it.  It's ridiculous.  This is the kind of thing I'll probably write wistfully about down the road, but right now it bugs me.  She can't stand with it raised, and it goes high enough to "decapitate" other figures.  Given the proliferation of ball joints, this might be kind o fun - but the weapon itself feels untrue to the Star Wars "feel" and the coloring is inconsistent with the franchise.  And I don't know what to call it.  It's not terrible, but it does not add to the figure.

Since we already talked about the combined mode, let's just say it's a good figure with an accessory that doesn't really add to the line in any meaningful way.   Back in 1995 I saw the giant secondary weapons as a decent extra - a second gun in a $5 figure was nice to have, particularly with troopers.   Due to the fact that it's a cool silver armored figure, you're going to want to get it no matter what I write about it.  Hasbro did a nice job, and oddly the painted torso mixed with unpainted limbs doesn't come off as distracting.  Let's see how she looks in a few years - but for now, this is the best (only) Captain Phasma. 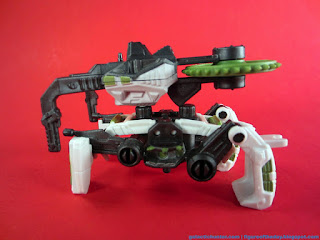 Collector's Notes: I got mine from Entertainment Earth.   I assume this is sold out by now, as I wrote it before today, but you can go looking for it in a local store - where it will also be sold out.