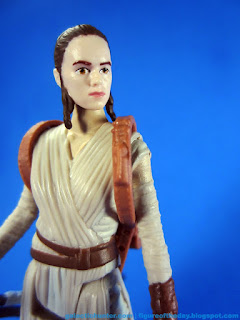 Bio: Rey is a resilient survivor, a scavenger toughened by a lifetime of dealing with the cutthroats of the harsh desert world of Jakku. (Taken from the figure's packaging.  It means nothing.) 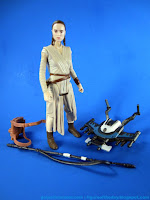 Commentary:  As someone who has been watching news and rumor sites, the quasi-information we have about the likes of Rey - last name withheld, but I'm hoping for Ayanami - and speculation (fan wishful thinking) seems to be pointing toward her being the offspring of one (or possibly two) of the three main original heroes.  It's one of those weird things that's both obvious and confusing.  You may not remember this but people actually left The Phantom Menace convinced that Darth Sidious and Senator Palpatine were no the same person.  J.J. Abrams must love these people, because the Star Trek crowd smelled out the whole Khan thing months in advance despite his repeated denials.  It's a different era for fandom, let's say that - Star Wars fans (especially collectors) have been misled and outright lied to in the past, so the omission of her full name on the cardback is quite mild by comparison.  Personally, I don't know why they don't just blind-box the things with no  name for the first waves just to keep it interesting.   "Hey nerds, we know you're going to buy this stuff anyway, so here goes."   I'm not even really kidding - the name plate on the packaging is so small that its absence would probably have little effect on product sales.   I'm sure kids are just asking for "White Mummy Arm Girl" or "The Guy from Attack the Block" or "The pilot dude from the movie where he made the sex robot" anyway.  Kids grow up so fast these days. 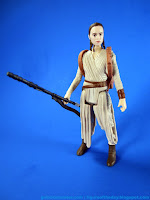 All kidding aside, this is one of the best figures.  BB-8 included would make it perfect - but it's very good.  The figure seems very similar to the 6-inch one and has less paint.  It's still good, though - clear eyes, decorated lips, and decent hair with pretty much the same wrappings and coloring on both, but this 3 3/4-inch figue has a less white undershirt than her giant counterpart.   She's very pale for a desert-dweller, with shockingly clean clothes.  They must have caught her on laundry day.  She has boots, plus loads of wrapped garments which I assume are ideal for not melting under however many suns Jakku has while also not freezing where ever this Starkiller Base is.   As I write this, we really don't know. 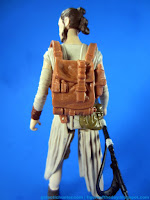 Her unpainted backpack reminds me a lot of the mail-in accessories from the vintage days, with a rubbery strap that wraps around each arm and has holes with fit on a peg on the main backpack.  It fits pretty easily, and it looks good too.  I assume it must have some narrative purpose, but we're three months out from knowing what that is.  It's a neat throwback, while her pole/rifle/whatever it is can be held in either hand or thrown over a shoulder.  It's sort of awkward on the shoulder.   As few characters get two movie-derived accessories, Rey is something special - and other versions of Rey will, of course, be on the market if they aren't already. 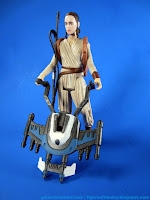 The "Combine!" accessory is actually pretty neat.   It's like some sort of small hydrofoil/kickboard, covered in guns, with a tiny hole and a tiny peg to combine to make... I don't know what that thing is.  It's ugly, whatever it is.  Each individual piece of the "Snow" figure weapons turned out well, and this one also can be mounted on the head of a Disney Astromech droid.  It just so happens the peg on the bottom of this weapon is the same size as the hat peg in an Astromech dome.   If you want to make a tribute to R5-P8, this would be the way to do it.   She has some difficulty holding it thanks to her arm pose and limited articulation - it was bound to come up eventually - but it's still pretty nifty.   At least it's interesting and imaginative, even if it doesn't interact with Rey as much as I would prefer.

Get this one.  That's really all there is to it. She can sit, she can fit in a Landspeeder, and she's a decent all-around stander, sitter, and vehicle pilot.   She fit in pretty much every vehicle I tried, including the seats of the cockpit of the big Millennium Falcon.  This means she's a winner, and so far this may be the best main character in the entire range.