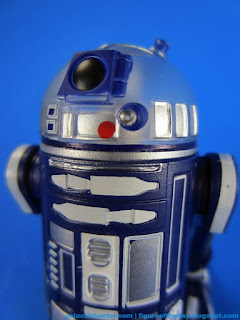 Bio: R2-D60 is unlike any other Astromech droid in the galaxy. As a spy for the Rebel Alliance, R2-D60 lives on Coruscant and serves different members of the Imperial Senate. His droid build is similar to other classic R-series droids, but features a frosted R2-style dome and a silver metallic paint finish. Join R2-D60 on his adventure across the galaxy. May the Force be with you... and your droids! This Astromech Droid figure was created to commemorate 60 years of magic at the Disneyland Resort. (Taken from the figure's packaging.) 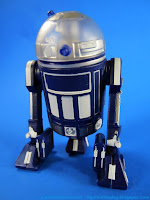 Commentary:  You know you're reaching to write a bio when they just describe the figure's paint job.   R2-D60 is a souvenir more than a character, and his inclusion in the line means you've got one more obnoxious figure to track down.  There's no good reason for this figure to exist beyond there being a theme park anniversary and they want to sell you something Star Wars on top of the $99 one-day ticket (before tax).   It is for this reason that droid completists may want to take a deep breath and realize the endless stream of customizable and unique droids are sort of a no-win scenario.  If you want to be complete, it's going to set you back a lot - more if you don't live near a Disney park with an annual pass that you'd have bought anyway.  A friend of mine was kind enough to help me on this one, but Holographic R2-D2 (Florida exclusive) meant eBay.  I got one for $20 shipped, which is expensive but cheaper than going there and paying for parking would have been.   I'm not a big fan of toy scalping, but in this case I think I (and hopefully you) can live with the unfortunate reality of $20-$25 shipped droids from theme parks.  It's still cheaper than what it'd have cost from The Star Wars Fan Club 15 years ago. 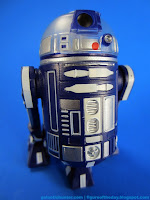 The figure itself is a neat oddity - the dome is actually a clear frosted R2 dome, which is a different sculpt from the typical clear R3 dome.  Numerous blue and silver panels dot the head, complete with a big black eye in the middle.  It looks great, and matches the dark blue body nicely.  White panels and black markings do wonders to bring it to life, but depending on the nature of your collection this figure may be a huge waste of time.   He's homeless, a uniquely decorated robot based on the same mold you may have bought a few - or a few dozen - times by now.   Does carding it make it any better than the ones you can make yourself?  Maybe.  Maybe not.   I lie it enough as its own little thing, especially with generous paint applications on the feet.  Lots of silver and white make it a lot nicer to look at than his siblings, but there's no real story here.  If they threw in a nod to being Jorg Sacul's droid, or came up with some fun reason to stick one in a diorama other than "Imperial Senate Spy," I might be a tad more excited.  If you look at this figure as some sort of fun designer R2-D2 it's a worthwhile addition to your toy box, and to the never-ending pool of droids that people like me are generally happy to see on a regular basis.