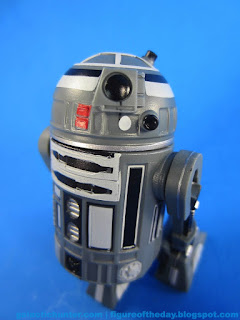 Commentary:  At first glance I was shrugging and saying "What, another R2-Q2?   This is ridiculous."   Here's the thing - it's different.  Not just a little different, but different in several visible ways.   This makes the third version of the droid in plastic as a 3 3/4-inch scale action figure,  and as this one doesn't look like either the Tantive IV or Biggs versions of the existing R2-Q2 I'm going to go with the box' indication that it is, in fact, from movie #7. 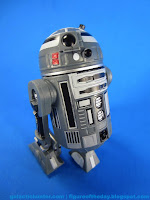 The dome is the most different part, but some elements carry throughout the droid.  For example, the plastic of the dome is the darkest grey of any R2-Q2 so far making it immediately stand out from his siblings.  Instead of the reverse Oreo ring on the dome, it's just a black ring with a white ring underneath.  The dome itself dropped the silver ring on the panels in favor of grey panels with white outlines.  The central black eye no longer has a black square around it.  The various lights are painted differently - the blue light is now white, while the red boxes now are outlined to give them a fuller appearance.   On the back of the dome,  you'll find a blue dot and a black rectangle where blank plastic previously reigned supreme.   Why they even bothered to keep the name with so many changes is beyond me.   As far as I'm concerned, it's a new droid.

His central leg is not only darker, but painted - the Entertainment Earth and Disney Droid Factory build-a-figure releases were unpainted.  This one has a stripe down the front of the back, plus a white semicircle on either side.  The legs have fundamentally the same paint masks, although mine drops a few markings on the back (one of which may just be an error on my sample) and inverts the Droid Factory build-a-figure version's feet.  That version had painted silver feet with an unpainted semicircle, while mine has a painted semicircle on one foot and the other is blank.  This, again, may be an error.  I don't know if it's intentional yet. 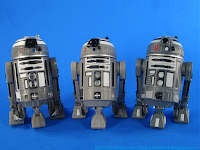 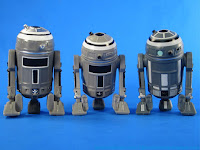 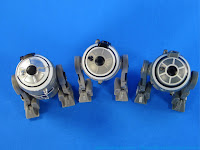 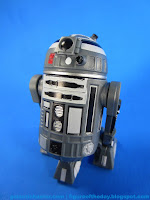 His torso is, again, pretty different - but only on the back.  The front of the figure is very similar to previous releases, with minor changes in spots like a silver detail becoming white.  The back is very different - the painted panels aren't the same, and the coloring is very different.  I'd write it up, but just look at he pictures - more white and silver has been added, while most of the black is gone.  Assuming this is true to the movie, I appreciate the attention to detail.

The foot issues and new colors make me think I may have a unique droid and I like it - or perhaps a factory reject.  It's hard to tell until more people get theirs and post them, but until then I'll just say I like this figure and the set is indeed notably different enough to be worth your while.   If you can, squint at the feet in the box first just in case they're missing paint - because better safe than sorry.

Sorry, Adam, I looked through a ton of boxes, and totally didn't catch the missing paint ops. My version is indeed symmetrical for both legs.