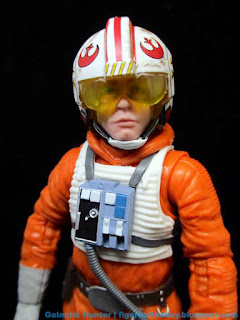 Bio:  During the Battle of Hoth, Luke Skywalker piloted a Snowspeeder and led the Rebel Alliance against the Empire’s ground forces.   (Taken from Hasbro's marketing copy.) 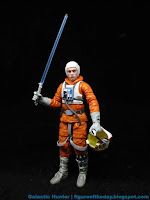 Commentary: This Luke Skywalker (Snowspeeder) is a new and improved figure from Hasbro - and my only complaints about it are that it could have been only slightly more amazing with more accessories.  With the newer shoulder joints and smoother articulation overall, Luke has the same great sculpted detail but fixes a lot of the quibbles we've had on earlier figures.  I see no visible copyright markings.  The orange is uniform, there's no obvious mismatched orange paint vs. orange plastic.  The face is perfect.  The helmet is gorgeous.  The lightsaber hilt can hang on the belt hook.  Just about everything here works perfectly. 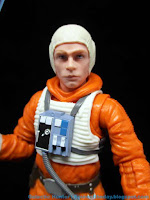 I'm not sure if he will fit in the 6-inch scale Snowspeeder coming down the road, mostly because the legs can't swing forward all that much.  It would have been enough to sit in the old Kenner vintage vehicles, though, so maybe it'll be just fine.  I love how the arms have so much ability to move so he can gesture or grab on to controls (in theory), but there's no blaster or grapple gun.  This is odd, because the retro one had a grapple gun and many other releases since the 1990s had some sort of pistol or blaster.  An alternate, un-capped head would have also been cool - so you could recreate his Dagobah landing.

If you get this figure - and you should, it's getting rereleased in a box later this year if you missed the carded release - it's a gem. The helmet has these perfectly printed symbols and scuffs.  The lens is wonderful.  The arms are perfectly textured, and the shoulders can swing forward a bit if you like.  The boots look great, the knees are very well-hidden, the gloved hands hide wrist joints very well, and there are all sorts  of painted buttons, rivets, dials, and switches. 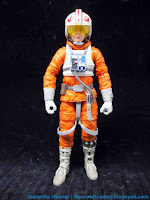 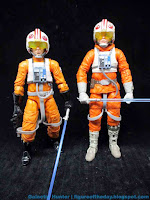 With that great printed face, it seems obvious this Luke got a ton of love.   The earlier 6-inch figures were fine, but Hasbro has broken through "fine" and has now landed on "impressive."   I know it's tough to do things within budget, but seeing new figures like the Hoth Rebel Soldier and this Snowspeeder Luke, it's like we've just had years of advancement.  After years of no advancement.  Kudos, Hasbro - I assume we're going to see more repaints and reissues, but your new stuff doesn't disappoint.   More freshness please.  (Snowspeeder Wedge is also welcome.)

Apparently, the grapple gun will come with the speeder vehicle.