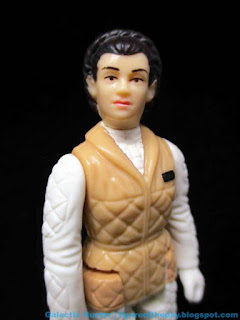 Bio: Leia Organa was a Force-sensitive human female political and military leader who served in the Alliance to Restore the Republic during the Imperial Era and the Resistance in the subsequent New Republic Era. (Stolen from Wookieepedia.  Packaging has no bio.) 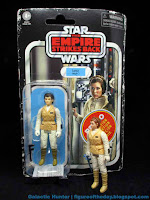 Commentary: There are vintage, Retro, and 40th anniversary versions of Leia (Hoth) potentially floating around right now.  Hasbro has been surprisingly good at making sure the same character in the same outfit has been available in multiple expressions all at once since 2015, and in this case all of them are reissues - some with moderate changes. 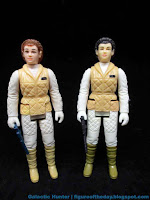 The original 1980 figure has variants aplenty, with three different names appearing in the pillbox - "Leia" or "Leia Organa" or "Princess Leia Organa" in the old days.   Her rank badge could be smooth black or sculpted.  Her hair could be a lighter almost red color or darker brown.   There were two different head sculpts, too.   And weirdly, these were generally things fans didn't fawn over in the 1970s-1990s - you'd hear about red cloak Bib Fortuna, or maybe blue lightsaber Jedi Luke, or of course Vinyl Cape Jawas and the rocket-firing Boba Fett every third kid claimed to have as a child.  But the Leia variants?  These were rarely catalogued or discussed in the old days. 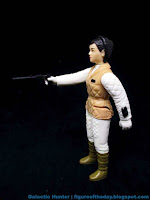 This figure seems to be similar to the one I have - but there were quite a few changes, too.   The 2020 one has a smooth rank badge, a black (and not blue) pistol, a less yellowy and more brown vest, and darker brown boots.   Much like Boba Fett and Bespin Luke, there are enough things different here that I think old-school Kenner completists would want these just to have every last little change they could get.   The changes don't in any way make her seem more true to the movie or realistic, but she is a bit less vibrant.

Sculpted details like her quilted vest and pants aren't quite as sharp as the 1980 release, but they're still remarkably good.  Most notably, the wrinkles on her pants beneath her vest in between her legs have been completely smoothed out for 2020.  The wrinkles on the back of the legs are looser, and her pants are seemingly not quite as tight either.  I don't know if this was a result of how the replica was scanned or sculpted, or an intentional choice on the designer's part.  As I am not the biggest fan of remakes as a thing, seeing any kind of visual sculpted change to make it easy to spot a change from an original to a reissue is always welcome. 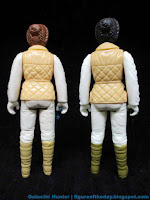 The figure has a slightly different feel, but it's excellent.  She's a bit more flexible and rubbery for 2020, but this means she can also grip her pistol much more easily.   The 2019 reissue Leia (the 1978 figure) couldn't hold her blaster to save her life, and this one seems to be a shining gem of how to grip an accessory well.  The blaster itself is a bit larger than the vintage counterpart, with essentially all the same details.  Which is to say, almost no sculpted details worth noting.

I much prefer the 1980 figure's head sculpt but this one is good too.    She feels like a real toy, if not a real 1980's toy, and that's perfectly fine with me.  The cardback photo is fine, the figure is good, and the accessory is different.  This ticks all the boxes of how to make me happy with a reissue of a collectible toy.   Applause all around.  And if Hasbro wants to remake this Kenner one again, there are plenty of fun variations to rerelease later!

Collector's Notes: I got mine from Walmart through my pal Scott "ToyGuru" Neitlich!  Did you see his new Spector Creative YouTube channel yet? Click here.