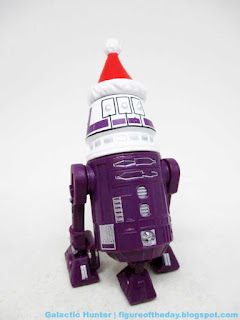 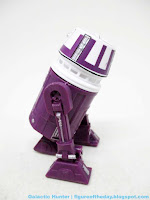 Commentary: One of the most recent quartet of additions to the theme park bins, this R5-Series Astromech Droid with a White Dome with Purple Panels is pretty neat. You can pop it on existing purple bodies, and that's what I did! We looked at the body before so there's no shortage of commentary there - let's focus on the new head.

The R5 dome is nothing new, but the patterns are. The unfortunate thing is we've seen so many droids with so many patterns that it can be hard to look at some of those older droids - and because mine aren't set up properly, I can't be 100% certain that when I tell you it's inspired by R5-X2 and R5-X3, that I only think this purple dome has unique paint masks. The rectangles around the eyes are familiar, but the purple stripes are unique. The area around the sides has big thick purple stripes, and I would argue the back of the dome looks more ornate than the front. I don't believe this dome appeared on camera - please prove me wrong in the comments - and the pattern looks a lot like something somebody painted using masking tape during the original trilogy era. It's good. 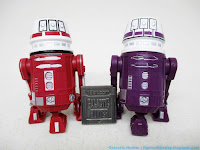 The top of the dome has a black outline tat is so fine, I would assume it was done by someone who bought the figure to customize it. But that's not the case - it's just extraneous, and under the hat you wouldn't miss it had the left it off. It doesn't hurt anything, though, so it's just a sign that someone at Disney had no problems finding the budget to really soup up some of these robot heads. 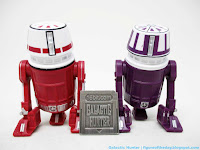 Figures like this are a reminder of the excess we've had in the last few years. I've never been able to get my figures set up quite right, and I have more droids than I can keep straight - there are so many similar-but-different robots that look vaguely like R5-D4 or R2-D2 that it's difficult to keep track of just how many variations exist. (Really, that's the book I would write at this point if I had the time or funding to do it.) 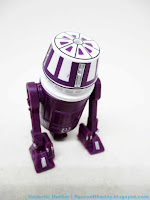 Figures like this serve as a reminder of just how spoiled we are - and I am - that I have good friends that could help me track down droids that have sat on a shelf next to me for five years until I reviewed them, in part because I know you guys get bored when you get a month of nothing but clones or droids. This is one of those figures you're unlikely to get outside eBay or a theme park, and it's one I think is good enough to track down. Of course, if you have one of the aforementioned R5-X2 or R5-X3 figures, maybe you're good to go. If not, and if you just need more purple droids, this is a good one. I don't know where it fits in with a collection or diorama, but it sure is nifty.