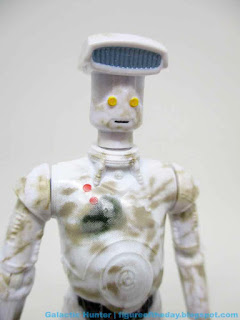 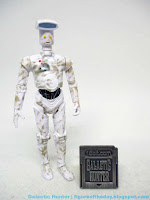 Commentary: The new head! The White Vendor Droid is a little muddied. As of when I got this one - and he's been in a box for, oh, four years - the "white" body had this pretty nifty dirt deco printed on it, which goes particularly nicely with the CZ droid heads. But there are also other muddied torsos and limbs, which creates a good consistent look across all the droid parts. My sample has a torso that takes some cues from K-3PO with the red dots and blast mark/smudges over the chest, resulting in what you might call a decent original design. As far as I know this colorway has made no actual appearances in the saga, but Wookieepedia places them in The Phantom Menace and Solo - and I don't believe this head has appeared in those films. You know what the kids say 0 pics or it didn't happen.

The main selling point here is the unique head - one of a couple of dozen released into theme park bins in 2017. The white head has a scanner-like hat on top of the noggin, yellow eyes, and a black slot mouth you could probably slip a few bills in. It looks a lot like an old-school LEGO man head, minus the color and lack of a smile. It's also a little small, but as a unique creation you can only get at the theme parks, collectors will have to deal with hit. Hasbro has made no plans to do any such droids and I doubt that they ever will at this rate. 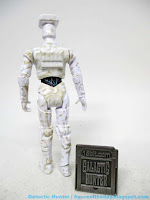 Articulation is build-a-droid standard, with 6 removable limbs and a grand total of 20 points of articulation and a design modeled from/copied from Hasbro's The Legacy Collection protocol droid. If you get in real close, you can see some of the details on the chest are printed like the current "photo real" bits - but here, they're glossy. Given that this is a figure that exists mostly to serve as a DIY souvenir, I can't recommend you get it, or replicate it, as it's probably only worth getting if you're a droid fanatic. Sadly Disney never offered a big box of Protocol Droid parts to do your own, so your proximity to theme parks will probably result in if you get one of these or not. I have no idea if they're still available - they're scarce on eBay too. This is one of those weird robot figures that, one day, someone will make a "definitive" guide to these figures and probably leave out. That's how it goes when you're a forgettable nobody of a robot - except you're me, I love this nonsense.