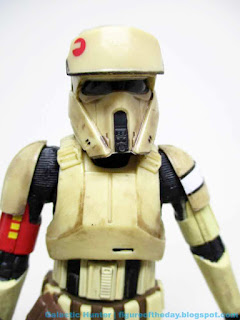 Bio: Specialist stormtroopers staged at the top secret military headquarters on Scarif, shoretroopers patrol the beaches and bunkers of the planetary facility. (Taken from the figure's packaging.) 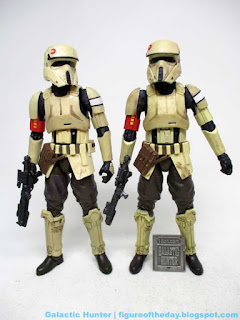 Commentary: If the Shoretrooper looks familiar, it should - it's a reissue of 2016's Walmart exclusive Scarif Stormtrooper [FOTD #2,322]. The update seems to mostly be a batch variant from the release from five years ago - most of the paint applications are pretty much the same, but any mass-produced figure will have some visible differences from figure to figure - especially with this kind of time between production.

The figure shares tooling with several others, and likely will share parts with more in the future. Heck, there's a third Scarif trooper we still don't have! This one looks more or less like the other trooper - the tan is a tiny bit different, the body glove seems a smidgen darker, and the paint wipes are different as manual wipes are wont to do. The 2021 release has a lot more in the way of wipes, but they tend to be more subtle. The arms are a bit dirtier on my sample, and the helmet is as well. Some of the chest dirt looks the same, and the smudge on the area below the belt is a bit more pronounced too. However, the boots have some patterns that seem identical to the previous release, which is a pity - it would've been great if they just left it off entirely so it would look different in any shelf army situation. Still, it's different enough that any collector who is inclined to army-build should be fine buying another one of these. I've more or less sworn off army building at this scale, so maybe some day I'll get rid of one of them, but right now I can say they're different enough to warrant trying to show them to you.

I admit, there is zero chance I would have said they were different without putting the old one and the new one side by side. Obviously you can tell by the SKU painted on the sole of the boot - but otherwise, I doubt most fans would just be able to tell which was which at a casual glance. I haven't seen enough of the Walmart release to know if each one is a bit different, or if they're all the same - right now I would wager Walmart's are only just barely cleaner.

It's a great figure if you missed the original release or just want more - you get the same blaster, with the same deco, and the same 27 points of articulation. I can't knock it for delivering what the market needed, particularly given the high secondary market price of the original release thanks to its limited availability. If you never got a Shoretrooper in this size, you should get this one. Unless you don't like the big guys, in which case, why are you even reading this far?